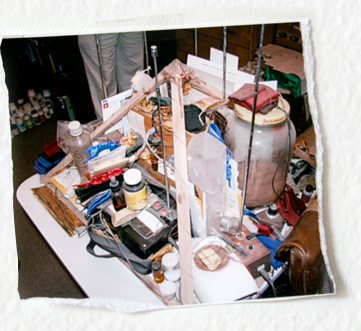 I Think We’re Alone Now is a documentary about many different things, but primarily about loneliness and how easy it is to turn that feeling of isolation into obsession.

The film follows two individuals and their decade long infatuation with the 1980’s pop-star Tiffany. Jeff Turner is a 50 year old man with Asperger’s syndrome who truly believes that Tiffany is his best friend, mentor and confidante, even though she filed a restraining order against him many years earlier. Kelly McCormick is an “Intersexual” person, which I believe is the same thing as being a hermaphrodite, but the more technical term for it. She believes she is a woman on the inside but, due to having both sets of genetalia, is dealing with some serious gender confusion and depression. She has never seen a Tiffany concert in person, but she knows beyond a shadow of a doubt that Tiffany is her soul mate and they’re destined to be together, forever.

Somehow, the film manages to paint both individuals as sad, mildly delusional and possibly certifiable, but without ever turning the proceedings into freak show exploitation. The film never encourages the viewer to laugh at the subjects, instead the focus is always on finding new ways of empathizing with them. As a documentary, it reminded me of The Wild and Wonderful Whites of West Virginia, another sobering view of people on the fringes of society, living off of the government and not accepting society’s opinion on how they should live. When the Whites have the cameras turned on them, they become more manic and belligerent than ever before, whereas Jeff and Kelly see a chance to possibly let Tiffany know how they feel. Watching the Whites get arrested and lose their children to child protective services made me feel like if we as a society had just left them alone to live their life in peace without the Hollywood money flowing in, then maybe they would have been better off snorting their Hillbilly Heroin in peace, but watching Jeff and Kelly try and feel one moment of connection with their idol feels like the attention they’re receiving could be saving their lives.

The documentary brought up many interesting questions I really hadn’t given much thought to in the past, like when does a documentary cease to be an expose on a lives completely alien to us and start feeling like genuine voyeurism? On one hand, I constantly felt like I shouldn’t be watching these people, that what I was seeing was incredibly private and off-limits but, at the same time, I felt like these people were desperate to be seen for the first time in their lives and I owed it to them to bear witness to their sorrows. By the end of the film, as Jeff and Kelly set off on the road to meet each other for the first time at a Tiffany concert in Las Vegas, I knew things couldn’t possibly end the way that they wanted it to (with Tiffany expressing her undying love and moving in with them), but the film still managed to end on a note of hope that I truly didn’t see coming. That these people with such a specific obsession aren’t alone in this world is a beautiful thought, and should give some hope to all of us.

The film is available to watch instantly here or to purchase here.