...And Central Oregon beefs up its avalanche awareness. Read on...

On Sunday a skier who was exploring the backcountry around the Alta Ski Area was buried under four feet of snow after he was consumed by an avalanche.
Lucky for buried dude, part-time Bend resident and mountain guide Todd Glew was on the scene.

Glew, who works for Timberline Mountain Guides, was the first one to reach the victim. Glew immediately switched his beacon to "search" mode and found buried-dude quickly. The first probe strike, which came from the victim's partner, who had followed Glew to the toe of the avalanche, found buried-dude and the two skiers quickly uncovered him.
UnofficialNetworks.com reports that Glew said the following:

“I was not really excited about the whole rescue,” Glew said. “When I saw it, I thought I was digging up somebody that was dead…We dug up a guy who is purple and blue or whatever, but he was OK.”

Buried-dude is now alive-dude, and reportedly walked away after he was uncovered. A life was saved because Glew had a beacon and is an experienced backcountry skier with avalanche safety training. Buried-dude also had a beacon, allowing him to be found.

Now, in Central Oregon, backcountry shredders operating out of Dutchman Flats, Paulina, and Three Creeks have increased safety measures that should help keep them out of avalanche danger. Central Oregon Avalanche Association, in partnership with COCC, has put up avalanche awareness signs at all three areas as well as a beacon checker at Dutchman. 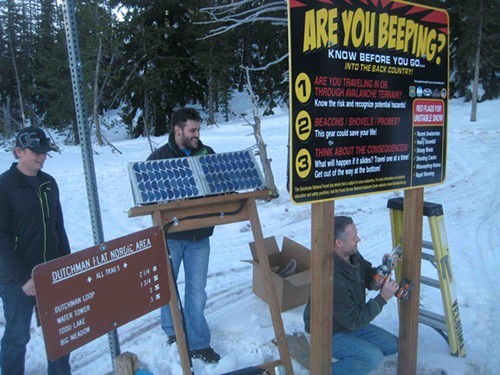 They hope to soon have beacon checkers at all three locations.
Obviously such measures are awesome and quite useful but are NO SUBSTITUTE for knowledge and proper equipment. If you have a beacon, probe and shovel but no idea what to do with them when the shit hits the fan, such gear does you—and your partners—no good. Take an avy class, attend the local info sessions and practice with your gear. Hopefully, you'll never have to do what Glew did.
I caught up with Glew today—look for a full story about his experience, as well as avy tips and more on the beacon checkers in next week's issue.
“Beacons can save lives, but if he had of hit a rock or tree he would have been crushed,” Glew said.