The Somewhat Surprising Results from the Unofficial Mirror Pond Survey

Further proof that the tide may well be turning: 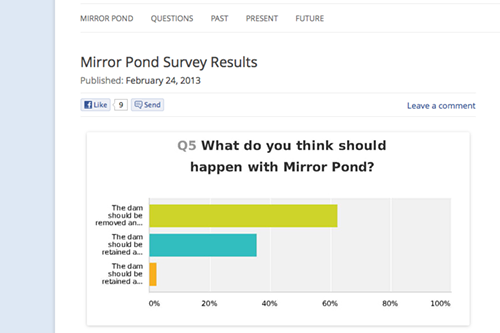 That long, split-pea green bar on top represents the 62.26% of respondents who think "The dam should be removed and the river returned to its natural channel." About 300 participated in the the unofficial survey, issued by the Old Bend Neighborhood Association via the website mirrorpond.info.

The last two questions of the eight-question survey were also surprising/pleasing to see:


Q7 If the dam is removed, what would you like to see happen to the land no longer submerged under Mirror Pond?

12.31% — It remain in the hands of its current owners. (McKay family?, etc.)
15.77% — It becomes the property of the adjacent land owners, maintaining their river frontage.
71.92% — It becomes public property and remains in public use.

Q8 Which would you prefer?

44.32% — Mirror Pond to retain its current charm and iconic stature.
55.68% — Boat or float the Deschutes River from above the Bill Healy Bridge to below the First Street Rapids.

The unofficial survey was drafted in response to the official 19-question survey issued by the Mirror Pond Steering Committee earlier this year. While a number of the Old Bend and River West Neighborhood residents who live near or along the Deschutes River participated in the survey, the majority of respondents—nearly 54%—live outside the two neighborhoods above. You can find complete results here.

The official survey proved unpopular with scores of Bend residents, many of whom have voiced their concerns during various public meetings over the past couple of months. Polling closed today for the official survey and results should be available on Thursday, Feb. 28.