Bend Makes Another List, But Not a Good One | Bent

Bend Makes Another List, But Not a Good One

Yesterday PBS published a study* that found potentially unsafe levels of chromium-6, a known carcinogen, in the tap water of 31 of the 35 cities that were tested. Bend is on the list as nearly .78 parts per billion were found in Bend water provided by Avion Water. In 2011 California set a public-health goal at .20ppb. The EPA is still trying to determine what's an acceptable amount. In 1991 the federal agency set the limit at 100 ppb. 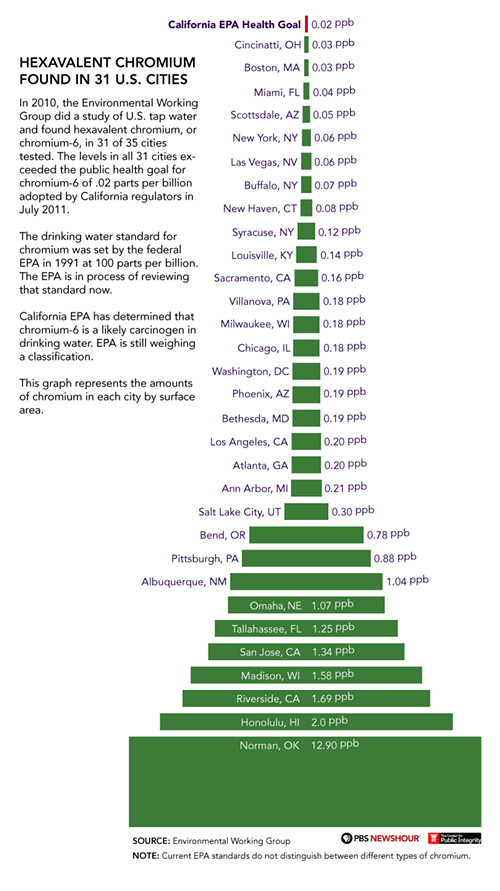 So while it may be alarming to see a cancer-causing compound in our drinking water, science-folk say we shouldn't fret. From an ABC report in 2010:


"No one has really established what is a carcinogenic level for drinking water," said Alfred Aleguas, managing director at the Northern Ohio Poison Control Center in Cleveland. "We need to establish what is a limit we have to be concerned about."

...Other scientists say that's an extremely small amount. One part per billion is equivalent to about a drop in 250 gallon drums of water, or three seconds in a century. Even if a city such as Norman has the highest concentration of chromium-6 of all the cities tested, that doesn't mean it places the residents at a higher risk for developing cancer than in other cities.

*the study was completed by the Environmental Working Group