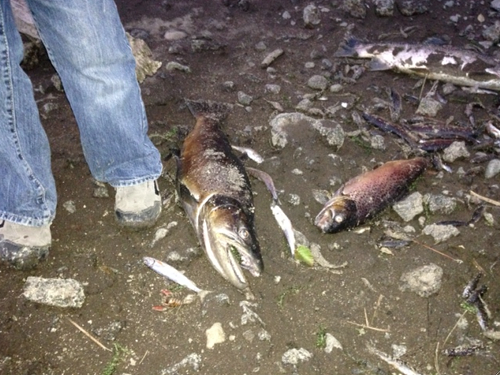 What's perhaps even more depressing than the scores of wild trout, whitefish and sculpin that annually are left for dead, is that for nearly a century the state has allowed such mismanagement. Why? Because water allocations and release schedules at Wickiup Reservoir, put into place in the early part of the 20th century, have long favored farmers who demand water for irrigation. During the summer (warm months) the watermaster releases so much water that up to 1,800 cubic feet per second flows through Bend, enough to satiate the farmers and their fields. But come fall/winter (mid Oct.) the demand for irrigation is nill and the water coming out of Wikiup—the water that feeds the once mighty Deschutes River—is all but cutoff, leaving thousands of fish, quite literally, high and dry.

This year, though, the massive fish kill that followed the reduced winter flows was especially severe.

"We have policies that allow for this to exist,” lamented Tod Heisler, executive director of the Deschutes River Conservancy. "The state of Oregon has over-appropriated our water for 100 years," he added, noting that water management is dominated by irrigation demands with little regard for the ecosystem. “We still suffer from that.”

Heisler pointed out that what happened this week is not abnormal and that in the 10 years that he's been in Bend at least half of the winters have been marked by extremely low flows, a result of a hot spring and summer and a perceived need to store water in Wickiup.

At least one group, however, is seeking a change to how water in the high desert is managed (right now it's based on 100-year-old policies) Heisler is part of the “Basin Study Work Group," a broad consortium of conservationists, land owners, state employees and other stakeholders who are working toward a sensible solution—one that will appease farmers but also respect the river and its wildlife, as well as the burgeoning tourism industry that relies on a healthy river.

Still, a fix is a long way off. And, in the mean time, there seems to be no plan in place for damage control. The Oregon Department of Fish and Wildlife has done little more than suggest a temporary fishing ban. Some advocates are calling on the state agency to ask for an emergency water release to bring levels up to a more sustainable level. The fear is that when the temperatures drop and the shallow waters start to freeze, more fish may be left to die on the icy shoals.

"What happened there in the last 48 hours is a travesty," wrote Jeff Perin, owner of the Fly Fisher's Place in Sisters, in an email. "It will have impact on fish populations for years to come. In addition, the impact to recreation, fishing and tourist driven dollars to our area will be felt for a long time. It is all so sad."