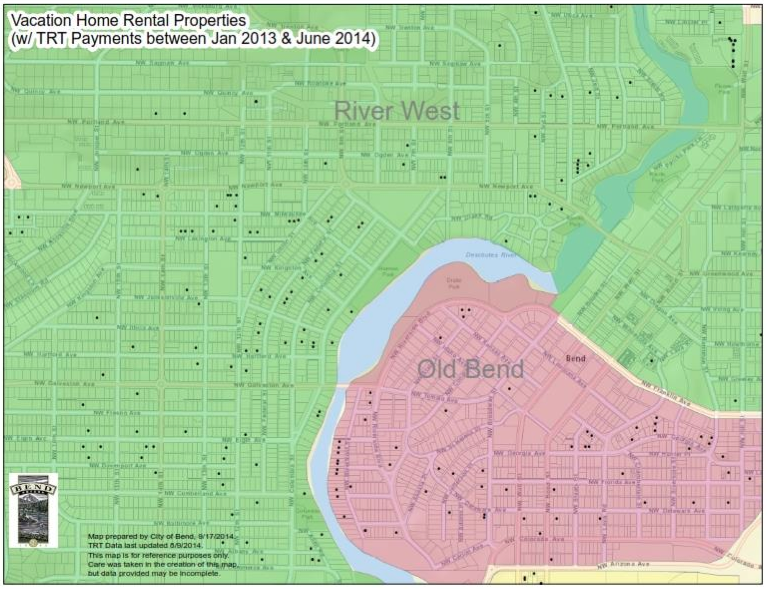 Vacation rentals dominated last night's Bend City Council meeting, with comments from community members and discussion from city councilors spanning hours over the course of the work session and meeting.

During the work session, City staff presented three options to address growing concerns over the number of vacation rentals in residential neighborhoods, particularly in Bend's River West neighborhood. Those options included creating an annual license renewal process through which vacation rental owners would be required to re-apply each other and the City could revoke licenses if owners don't meet requirements. The other two were land use processes, expected to take 4-6 months to take effect, and included a temporary suspension on the issuance of vacation rental permits and a cap on the total number or density of the properties.

After hearing extensive testimony from both residents and vacation rental owners, the City Council ultimately decided to take up the issue again at its October 1 meeting after doing some additional research. While councilors could not come to an immediate agreement on the best path forward, most seemed to concur that something needed to be done to ensure compliance from current vacation rental owners and to address high density in residential neighborhoods.

While vacation rentals comprised the bulk of the meeting—which ran until well past 11 pm—it wasn't the only hot topic. During the visitors comments section, a number of people with disabilities and accessibility advocates spoke out about the accessibility challenges they continue to face in getting around Bend, and concerns about the Department of Justice decision to close its case against the city.

A group from the Central Oregon Coalition for Access presented 150 barrier removal requests to the city, saying that these were the tip of the iceberg in a city where missing or broken sidewalks and inaudible crosswalk signals are the norm. They also encouraged more people with disabilities and their supporters to submit their own requests.

Near the end of the meeting, the City Council voted unanimously to hear the appeal from Truth in Site Coalition regarding the OSU Cascades site plan in southwest Bend. The city will hear the appeal at noon on September 29 in the City Hall chambers. Comments, which may only be submitted by those already involved in the process, must be received by the City no later than 8:30 am on Sept. 29, though the City Council encourages interested parties to send those comments as soon as possible.

Stay tuned for more in-depth reporting on all these issues.