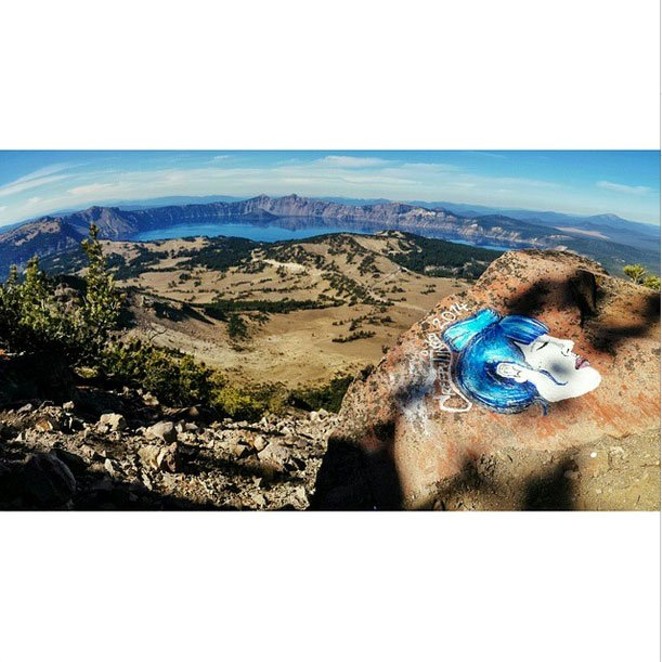 We like to imagine that "outdoor recreator" and "nature lover" are mutually inclusive terms. Unfortunately, some people are not so humbled by nature that they feel inspired to treat the wilderness with respect. That, and/or their parents failed to teach them manners. (Examples: Those Boy Scouts who tipped over an ancient rock formation, people who get drunk and shoot cans of hairspray in arid environments).

The most recent/egregious offender is an "artist" by the name of Casey Nocket. As Modern Hiker first reported, the woman has apparently been painting rock formations in national parks across the county, including Crater Lake National Park, and posting photos of her graffiti on Instagram.

Whether she's inspired by the pictographs by indigenous residents or the elusive Banksy, the National Park Service is not impressed. (Neither are we.) According to Modern Hiker, a National Park Service Ranger is launching an investigation. Though the woman, who goes by the handle "creepytings," appears to have set her Instagram to private, she is believed to have defaced natural features in Death Valley, Yosemite, Canyonlands, Zion, and The Ginn Mill.

Actual nature lovers are understandably angered, and a petition is now circling asking that, if found guilty, the woman face the maximum penalty.

What do you think is an appropriate punishment for defacing national parks?