March 11, 2015
comment
Tomorrow night at 7:00 pm a group of wildly famous, uber-talented authors will be hanging out at Bend's Tin Pan Theater. And, get this, they're all dead. Writers such as Oscar Wilde, Gerturde Stein, and Dorothy Parker will be brought to life again by students of the OSU Cascades Low Residency Creative Writing MFA Program—and hopefully a few non-student lit-geeks—as part of their "Dearly Departed" tribute to authors of yesteryear. The cost is a mere $5 suggested donation and if you act fast, you might still be able to join the roster.

I interviewed Irene Cooper, Creative Writing MFA student who will be making her impostor debut as American satirist and poet Dorothy Parker.

Source Weekly: How does "Dearly Departed" support the MFA Program's philosophy— to "teach ourselves to play outside our comfort zones" and "celebrate our own and each others' adventures in self-expression"?

Irene Cooper: "Dearly Departed" is a whimsical way to tap into some of our literary lineage. I say whimsy, but costumes are a funny thing. Some people feel liberated by costumes, some feel protected by them and others feel entirely exposed by dress-up. "Dearly Departed" is a fabulous opportunity to explore our literary icons as people to whom we have a connection, without worrying about egos, because, you know, they're dead. 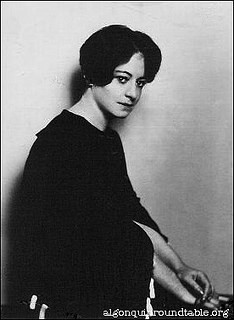 SW: Who will you be channeling and how will you prepare for the event?

IC: I am almost completely certain I will come to play as Dorothy Parker. I have selected a few poems that may be read under the allotted time (I sense that Mrs. Parker was punctual, among her other celebrated qualities). I screened Mrs. Parker and the Vicious Circle a while back and I watched Anne Hathaway read one of Parker's essays (no help at all). I have a wig.

SW: What kind of creative and artistic license does this kind of literary event afford participants and audience members that a more traditional reading does not?

IC: There is a certain protocol to a so-called traditional reading that is hard to put aside without some major shift. If the reading is of someone else's work, I think the reader aims to honor the writer in a sincere manner. So, someone stands at the front of the room, others sit and listen respectfully. One might shake it up by changing the space or in some way re-drawing the boundaries.The costume, here, is the shift. It provides a chance to embody the artist, to run some blood and oxygen through the material, and to perhaps take a little liberty with one's interpretation. We love them, we respect them, but again, they're dead, and we're not, and most of this stuff is now public domain.