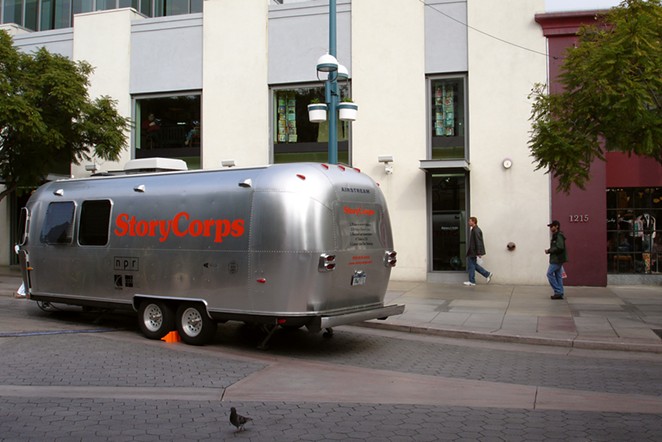 Everybody has a story to tell. For the modern day storyteller, media like podcasts and anonymous blogs give the opportunity to share those heartwarming and embarrassing human experiences with ease. From The Moth to Post Secret, Americans have fed the growing cultural obsession with recording those events—ranging from the mundane to the extraordinary—that captivate audiences of strangers worldwide. Never one to take the stage myself, I am filled with admiration for the comedians, poets, and storytellers who bravely divulge their personal stories to become part of the shared brain that is our cultural consciousness.

The first time I experienced the vicarious thrills and heartaches of another person's spoken narrative was in the backseat of my family's station wagon 12 years ago. We were listening to the loathsome local public radio affiliate, which is the bane of any family road trip for pre-teens everywhere. My perma-angst was dissipated, however, when a new short radio program was aired. The segment, known as "StoryCorps," was the brainchild of radio producer Dave Isay who envisioned his program as a way to give voice to everyday people with meaningful stories to tell, "particularly those who'd been told that their stories didn't matter."

For those who've never heard StoryCorps, the program—whose mission is to record, preserve, and share the stories of Americans from all backgrounds and beliefs—records the oral histories of diverse folks in their mobile and permanent StoryBooths around the country, usually in an interview-style format with a friend or family member. The recordings are then stored for perpetuity in the United States Library off Congress; some of the most compelling stories are broadcast by NPR in segments like the one I heard over a decade ago.

It was announced last night at the annual TED Talk Conference opening that StoryCorps, with the aid of a $1 million prize from TED, has developed a smartphone app that will allow anybody to record their story to be archived at the Library of Congress. This tool, which gives anyone with access to a smart device the ability to be heard for generations to come, has huge implications. The ignorance and hatred that arises from the inability of some people to relate with others whose experiences and identities differ from their own will be mitigated. The recurring mistakes that have plagued mankind—from the minor to the Earth-shattering—could be avoided with the wisdom imparted by those who have lived and learned.

And best of all, I will be falling asleep to the bedtime stories of strangers for conceivably the rest of my life.