February 21, 2017
comment
As he walked onto the stage at Sisters High School Monday to introduce Oregon Senator Ron Wyden (D), Sisters Mayor Chuck Ryan said the high school's auditorium was the largest space they could obtain for the event. With a large turnout, it was clear that bigger spaces were necessary. Around 700 people attended Monday's event, according to Wyden's staff.

When the Senator asked how many people in the room were attending a town hall meeting for the first time, a large majority raised their hands. With the electorate heavily involved in the political process in the months since the election, the turnout is no surprise. According to Roll Call, at least 27 Democrats and 21 Republicans from the U.S. Congress are holding town halls during this President's Day recess. Since 2010, less than a dozen Democrats have chosen to do so during the same time period, according to Roll Call data.

At Sen. Wyden's Sisters event, the first question from audience members was about Pres. Trump's alleged ties to Russia, and what Sen. Wyden was doing to address it. The Senator replied that he would continue to press the 45th president to release his tax returns, to ensure that the president's financial ties were not "more important than protecting your interests."

Audience members followed up with questions about immigration and the visa waiver program, campaign finance reform, the Violence Against Women Act, and the future of the Democratic Party. In addition, the question of how constituents can be more engaged and have their voices heard came up numerous times.

As Katie Cavanaugh of Sisters said before the event, "I'd really like to ask the question, what can we really do that is the most effective means in which we can make our voices be known and send a clear message." 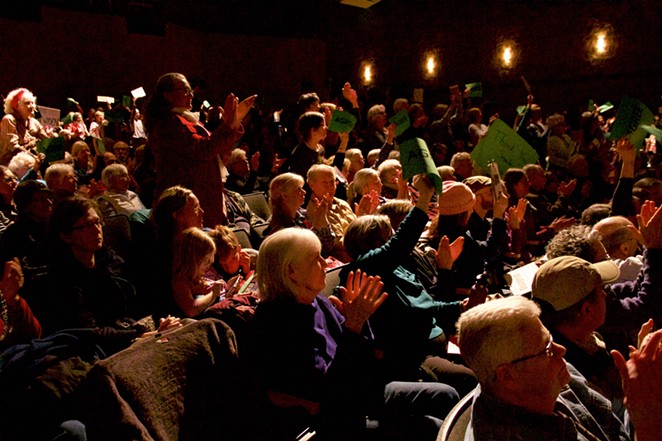 In addition to attending town halls, voting and writing letters to their own members of Congress, Sen. Wyden encouraged people to talk to people they know in other states, to ask them to call or write their members of Congress to push for the changes they want to see.

Senator Wyden's local appearances include another town hall held this morning at the Crook County High School in Prineville, and another scheduled for 10 am Wednesday at the Madras Performing Arts Center.