Ahead of the 2017 fest, a word with the festival's leaders

Ahead of the fest, Source Editor Nicole Vulcan sat down with BendFilm Director Todd Looby and Festival Programmer Erik Jambor to talk about what they're looking forward to (everything, of course!), films that speak to a Central Oregon audience (all of them, duh!) and other stuff.

Here's an excerpt of that interview. 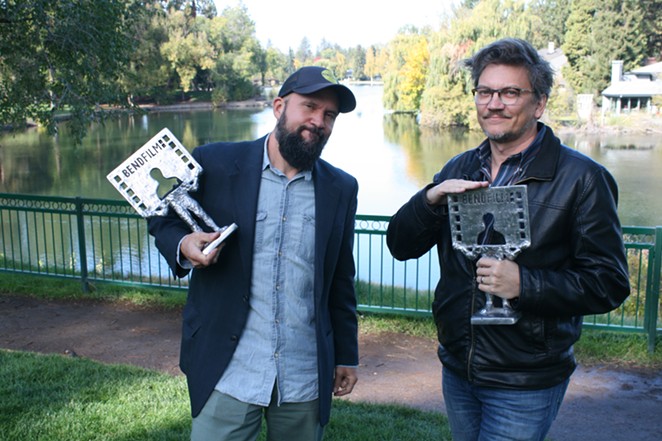 Source Weekly: First things first, what are you excited about at this year's festival?

Erik Jambor: Overall, I think what we’re excited about is the festival presents a really broad range of things, so we can say “Oh it’s got something for everybody, but we do that by having a lot of generic things that appeal to everybody kinda,

but by having a lot of cool things that deal with people specifically, and hopefully you’ll find your favorite new film that you didn’t even know existed.

So we’re trying to get people to get curious and explore and see something they know they’re gonna like and maybe try something they’ve never tried before.  So, a couple things I’m excited about are new world premieres that obviously no one else has shown before.

One of them is called “Dog's Best Friend” and the director is flying in from New Zealand to present the film here. I think it will be really strong for Bend because everyone here loves dogs, or most people have dogs, and it’s about a guy who’s rescuing pit bulls who are kind of beyond the point of help, like they’re gonna be euthanized, and he goes in and fixes them and saves them. He’s like a dog whisperer, and I think people really enjoy seeing that. It’s of course fun having someone travel across the globe to show it.

The other one is “Perfect Bid, the Contestant Who Knew Too Much”, and the director, is actually a BendFilm alumni from about 10 years ago, CJ Wallace is his name, and he’s driving from Canada to show it and the subject of the film, Ted Slauson, he’s also coming in. It’s Ted’s story about becoming this Price is Right guru memorizer guy. You notice that price is repeated on Price is Right, he memorizes them all, and then he’s been on the show 25 times, as an audience member 35 times, some crazy number. He’ll go and ask people to yell out prices and he’s helped a ton of people win things and then you get to see him finally get up there and you can see this scandal that pops up when he’s yelling out numbers and someone gets the show down to a dollar and they had to shut the show down to try and figure out what’s going on. It’s pretty exciting, it’s got some conspiracy undertones, and everyone loves game shows. The director was able to get new interviews with Bob Barker who, I hadn’t seen since he was doing the show. And now he’s mid-80s, early-90s, almost unrecognizable. Those are very cool and I keep saying it’s the funniest line-up yet , there’s plenty of dark, sad, depressing things mixed in but overall it’s a very funny line-up.

SW: Was a focus on comedy an intentional choice?

EJ: Yeah, I think comedies are pretty accessible and a good way to get people to enjoy a festival. I think film festivals do, in danger of giving things that are too dark and depressing because a lot of things people make are dark and depressing. We do want to make sure we have enough things in the mix. We didn’t mean to make it the funniest ever, but you can spend the whole festival just seeing things that will make you laugh pretty much all the way through.


SW: Was there any influence between what’s going on nationally and politically that we need that lightness?

Perhaps there is something happening nationally that people did want to laugh.

We have one film that kind of speaks exactly to that, it’s called “The Misogynists,” that’s a comedy essentially set on election night. It’s pretty much real time and that kind of may be what a lot filmmakers were directing, and perhaps people were in more of a mood to laugh. At the same time you have that crop of serious or issue-based or other movies coming out as well. You want to ride that wave of seriousness and get people where they’re at. It’s good to have that balance, that emotional equilibrium. That way you can experience a whole bunch. SW: When you’re choosing what films go in, how are you assessing the audience that exists here?

Erik Jambor: You want to have films that can be hooks for people that aren’t coming just because they love movies and they want to explore what we’re doing. You’ve got some outdoor hooks such as “ The Tenth Step.” People move here because of the outdoors and they love the climate, so that’s on that kind of hits that specifically. We know there’s a big dog culture so we know the dog one is gonna have a big audience. Those specific ones are always kind of a nice angle, like, what do we know people like? There’s also feature actors that people might recognize, like “Dog Years,” with Burt Reynolds and “Lucky,” with Harry Stanton. They’re actors that people might recognize and they might not care about the film festival but they know these actors and they’ll come and see that movie and that’s how they catch them. They might find these weird ones that are great filmmaking and they don’t know any actors. They get to be on the cutting edge and maybe meet the new Goldberg or Tarantino, it’s kind of cool to be on the forefront of new art like that.

SW: Is your strategy to try to push people, or meet them where they’re at?

Todd Looby: I think it’s a little bit of both, I think that’s what they want. They rely on us and more specifically, the films find new things. The audience looks to us to introduce them to new things. This year is the first year we’re letting the virtual reality lounge. The technology helps you empathize and see things that you wouldn’t normally, like one program lets you see the inside of a Syrian refugee camp. It’s a more engaging
marketing tool as well. People also wanna see the films they like that they wouldn’t see elsewhere. Some of the ones we’re showing wouldn’t be at the Tower or Tin Pan.

Todd Looby: As much as much of the town knows about us, but there are many more that will say “Oh, I’ve always wanted to go and never have,” so you have so many of those people. Maybe we’ll have 4,000 people come through but 90,000 in town so
there’s a large segment that hasn’t taken  the step to come and we understand it because you look at the book, and for someone who’s never been to a film fest, where the heck do you start? So we always say pick one that’s really interesting and that isn’t for a particular segment of the population, this is for everyone, this is for the town.  So there’s something in here that everybody will appreciate. We try to highlight those films, or work with particular organizations that have interest in the content of the film. Having a program in The Source a week before the event like what’s this thing, so you flip
through it and hopefully find something that seems cool. This helps too because
it reaches people who might not know about the festival, or others who might
never have come, but we might have a film about their favorite thing.

SW: Let's talk a bit about "No Man's Land," the film at the festival covering the Malheur occupation.


TL: Judge Grasty has an interview for the movie... I know he has strong feelings about what happened, as do many people in Burns. I think it was really important to get someone from the town who had a stake and who was intricately involved and kind of tell Bend what it was like to be in a situation like that. Because you know, Burns was, there was a peaceful coexistence between people working for BLM and ranchers, there was I think this had people talking. What you see in the film is how deeply it affected the community. So I think it's going to be a really interesting conversation about what happens when something like this happens.