Overcoming the backlash in San Diego 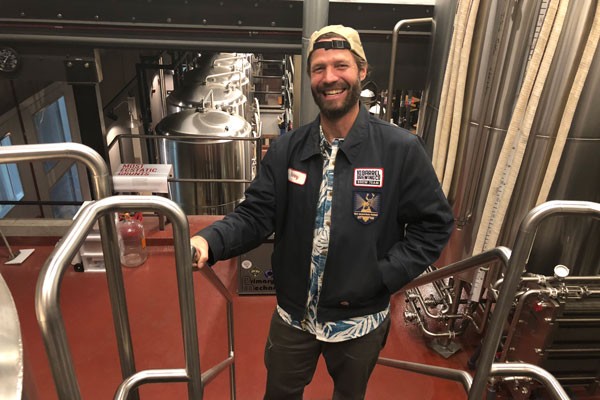 When 10 Barrel opened up in the Maker's Quarter District of San Diego, the reception from the other 150-odd breweries that call the city home was not exactly welcoming. Many locals decried the new neighbor, accusing it of hiding its AB-InBev ownership and trying to lure customers away from "real" local craft. A carpenter's union picketed the newly-built brewpub for not hiring local contractors for the effort. And a GoFundMe campaign raised $5,000 to rent an airplane that flew above the neighborhood during opening, dragging a banner that read "10 Barrel is not craft beer!"

Among the critics was Scot Blair, founder of Monkey Paw Brewery, located a mere block away from 10 Barrel San Diego. Blair celebrated the opening by collaborating with three other local craft outfits to produce "11 Barrel," a 7-percent IPA. "Are they going to create jobs? Sure," he told the San Diego City Beat newspaper at the time. "But do the ends justify the means? Couldn't Maker's Quarter have made it a little more affordable for a local brewery to go in there? A local brewery could also have created jobs."


"If we're going to brew beer here," Shirley said, "it's not gonna work if we just try to be like everyone else." —Ben Shirley tweet this

https://coronadobrewing.com/Monkey Paw (which itself sold to San Diego-based Coronado Brewing last summer, with Blair still in control) is visible from the rooftop deck of 10 Barrel's SoCal brewpub—one that should look familiar to anyone who's been at the Portland or Boise locations. The look inside is industrial, with a concrete-slab bar, bare floors and the 20-barrel brew facility pushed up right nearby the indoor seating. The roof bar, meanwhile, is high enough that most of downtown is visible from it, although patrons were shivering around gas heaters in the "frigid" 53-degree weather during a January visit. (Things reportedly pick up a lot in summer, when every local brewery takes in tons of Padres fans and tourists from the nearby Gaslamp district.)

"It was a really interesting experience," opening here, according to Ben Shirley, head brewer at 10 Barrel San Diego. Shirley, who worked for Bend Brewing and Deschutes before joining 10 Barrel, moved to San Diego after helping launch another 10 Barrel location in Denver, taking time out from the opening to visit Monkey Paw and enjoy some 11 Barrel. "I started out basically as a server and cleaner and worked my way up to production brewing, so getting a facility like this to play around in is a dream come true."

San Diego, of course, is a well-established Beer Kingdom, one populated by little joints including Monkey Paw, larger locals such as Societe and Mike Hess Brewing, and behemoths such as Stone and Ballast Point. "If we're going to brew beer here," Shirley said, "it's not gonna work if we just try to be like everyone else." This is reflected in the tap list, featuring usuals including Joe and Pub Beer alongside Chela Vida (a Mexican lager), Seclusion (a Belgian-style abbey ale), and Dampfbier, a German-style wheat beer. Lagers are a favorite of Shirley's, as indicated by the four-ish on tap here, but he's also responsible for Riding Solo, the single-hop IPA that's become a go-to locally as well.

Will 10 Barrel flourish here, far away from its base audience? A lot will come down to succeeding at that uniqueness—especially in a city that believes in "keeping it local" almost as much as Oregon does.