An emerging form of yoga, more approachable than it might look 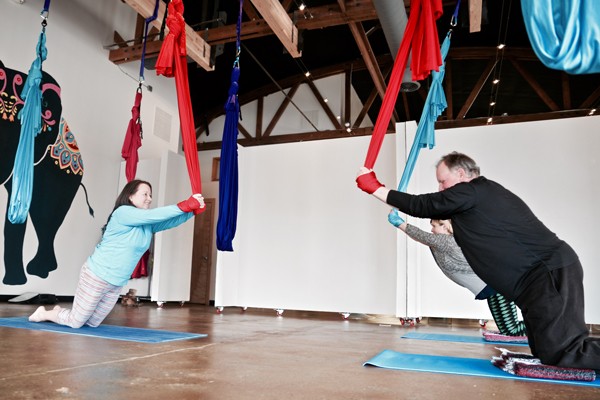 Let's just get this out of the way right now: Aerial yoga is not exclusively for circus performers, gymnasts and dancers. They're the source of inspiration for this increasingly popular form of yoga, but the deep stretches and strengthening beneficial for people who move their bodies for a living can also benefit the rest of us.

At Wren + Wild, the new natural cosmetics-slash-wellness studio located under the same roof as the Cosa Cura boutique, passersby can gaze into the floor-to-ceiling windows along Harriman Street and Greenwood Avenue and see a mass of mysterious-looking silky hammocks, hung from enormous rafters.

It's a tad intimidating at first glance, but once we were wrapped in the hammocks and hanging in a suspended form of savasana, like a trio of contented bat-children, we were convinced. Aerial yoga can be beneficial—and accessible—for people of diverse ability levels, and it looks really cool, too.

I was ecstatic. Those childhood fantasies of running away to Montreal and joining Cirque de Soleil were finally coming to fruition, or so I wishfully thought. The mantra, "Easier said than done," rings true with aerial silks, and the session can be as lighthearted or as intense as you, or your instructor makes it. Luckily, Mandy Butera was easy on us and my abs were sore for only a mere two days.

Sore abs, you say? Yes, dear reader, after a particularly dormant winter, my abs were suddenly shaken alive with moves that resembled the ab-roller infomercials of the 90s, and a stretch that kept me in a three-legged plank with one foot precariously dangling in a silk for what felt like minutes, but was probably seconds.

"Lift your other leg to meet it," said the instructor, as the three of us flew into a supported, silky, wheelbarrow. "No way in F***ing hell," was my thought after the fifth time. Luckily we were only instructed to only complete six.

Screaming abs aside, I was impressed at the seamless fusion of traditional yoga postures, supported or enhanced by the aerial silks—so moves like half pigeon or forward folds could be deepened quite easily. Plus, there's something about enveloping your body in silk that connects you to your sensual side— which I'm sure was what Richard enjoyed the most.

All in all, this was deeply relaxing and challenging. And even though spending 10 minutes in a cocoon-like hammock, comforted by a fur blanket from Africa, made emerging back into the real world all the more challenging, at least I was well rested and relaxed enough to do it.

The start of any new fitness class has me thinking, at almost 40, that I've already become like my grandparents, rattling off my list of injuries as if they're the only salient topics of conversation I have left. Nursing a longtime shoulder injury, a more recent elbow problem and a cranky back meant I was nervous about putting my body weight on said elbow and shoulder—but like all mindful yoga teachers, Butera offered modifications to accommodate. The plank pose sees your feet slung in the hammock while your arms support all your weight. Even in poses such as that, I still felt strong.

Other poses that plague me in regular yoga, especially the hip openers, became easier in this format, since there's no hard plane (the floor) acting as a barrier to a deep stretch. And since I am one of those whose arms shake and resolve weakens in floor-based inversions, doing them without the necessity of upper body strength gave me extra stoke.

Inversions are touted as benefiting the cardiovascular, lymphatic, endocrine and nervous systems. While peer-reviewed studies on inversions have been minimal, a 2007 article in "Yoga Journal" quotes longtime University of Minnesota anatomy instructor David Coulter, Ph.D., who said: "If you can remain in an inverted posture for just 3 to 5 minutes, the blood will not only drain quickly to the heart, but tissue fluids will flow more efficiently into the veins and lymph channels of the lower extremities and of the abdominal and pelvic organs, facilitating a healthier exchange of nutrients and wastes between cells and capillaries."

Three to five minutes upside down, using a busted-up shoulder as a base of support? Not so much. Accomplishing a three-minute inversion in an aerial hammock? Clutch.

During our hour-long session, Butera mentioned that we might feel a particular pose the next day, and she was right. The following day I felt just a twinge of soreness deep in my belly and in my upper arms and shoulders. But it was that good kind of sore, the kind that makes you want to feel it even a little more. It was like some old muscle friends that I'd forgotten about checked in to say "hello" again. If muscles could talk, it was like, "Hey, slacker! We're still here, even if you haven't 'partied' with us in a long time. It's about time you felt us again. Now, let's party some more!"

And that's how I feel about AIReal Yoga; I want to do it some more!

Butera was a helpful teacher, patient and kind, directing me to place my limbs and torso in awkward positions and poses while cradled in the silk hammock. She started us off easy with some basic poses while being suspended. As I got the hang of it, we worked up to the fully inverted, hanging upside-down position, which felt great, if not a little unnatural. By this time I'd just broken a little sweat and we concluded our session in savasana, fully wrapped up in giant cocoons.

For the rest of the day I was immersed in that relaxing physical and mental sensation of "yoga bliss" that only a great yoga class can produce.

Look for the 20/40/60 feature, featuring three generations trying out a new activity, in the Source the third week of each month.