2020's Local Wins and Losses: The Boot and Slipper Return!

While the boot and slipper are only occasional visitors on this page nowadays, it seemed fitting to dust them off as we look back at 2020

In days past, the topics found on the opinion page of the Source Weekly were classified by the "boot" and the "glass slipper." Politicians acting badly warranted a boot; favorable ones got the slipper. While the boot and slipper are only occasional visitors on this page nowadays, it seemed fitting to dust them off as we look back at 2020. 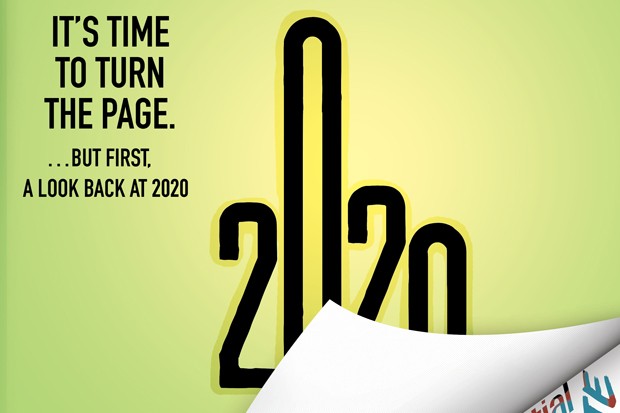 This past year will most certainly go down in history as a dumpster fire in many respects—but even among this COVID-infected conflagration, we've managed to find a few slippers.

Here's a slipper for people giving a damn again! Across the U.S., voter turnout in November's election hit record levels. Turnout was up in every single state, and in 98% of the counties in the U.S., according to NBC News. In Oregon, voter turnout was up 11% from 2016, where voters passed measures decriminalizing user quantities of drugs, supporting treatment and recovery programs and paving a path toward campaign finance limits in the state. This is what democracy looks like.

Boot: Oregon's failure to achieve in-person instruction for all students

By now, the vast majority of Oregon kids have spent over nine months not seeing the inside of a classroom. While districts, including Redmond and Bend-La Pine Schools, were able to organize very limited in-person instruction for a few kids, plenty of otherwise-motivated and engaged students have spent 2020 adrift. Creative, flexible thinking about how to get kids in buildings, and less fear of union outcry on the part of district and state officials, could have helped untold numbers of kids during this lost year. There will be plenty of political finger-pointing as the impacts begin to get measured.

Slipper: The year we stop saying "Bend is so white"

OK, recent U.S. Census figures show that Bend and Central Oregon are still majority-white, but with the ongoing conversations around racial justice and equity, the formation of Bend's Human Rights and Equity Commission and the advent of groups including the Central Oregon Black Leaders Assembly, the Love Your Neighbor project, the Father's Group and student-focused Town Halls on Racism, Central Oregon made important strides toward being more inclusive. "Bend is so white" is no longer a statement people can utter without having plenty of places to turn their frustrations into action.

Boot: October's melee at Pilot Butte—and the slew of charges that didn't stick

Black Lives Matter supporters were having a chill picnic at Pilot Butte in October before a brigade of Trump supporters showed up. One guy pulled a gun over an apparent misunderstanding, but cops decided to let him go. Later, Bend PD Chief Mike Krantz issued a highly unusual press release that recommended charges for 22 people, including some of the BLM supporters. "During my six years in office I've never seen the police department inform the public as to what charges they think I should file," District Attorney Hummel told the Source. He eventually charged seven people, including Jake Strayer, who police said pulled the gun.

Slipper: Frontline workers, doing their thing day in, day out

They went to work in March not knowing whether there would be enough PPE. Now, in December, they're still slogging on through some of the worst of the pandemic. If we could fashion the fanciest of fancy glass slippers, the kind that would see Cinderella herself staying around past midnight so as not to miss out on their splendor, we'd craft them for the health care workers—and support staff—working on the front lines. Slippers, too, for the many essential workers who have not had the luxury of working from home throughout this ordeal.

The Deschutes County Board of Commissioners' move to put a moratorium on new pot grows in the county on the ballot now means we'll lose out on any and all pot taxes we would be due. Bearing in mind that the current pandemic is exacerbating mental and social problems, and resulting in increases in suicide, addiction and overdoses—issues often addressed by county health departments—this initiative and its subsequent loss of hundreds of thousands of dollars gets nothing but a big, black boot. Stuffed with coal.

Bendites showed what the character of the community can look like when they showed up by the hundreds in August, demanding to know why two local men were being detained by U.S. Immigration and Customs Enforcement. While the ultimate outcome involved seeing the men carted off to a detention center in Tacoma, the protest showed what rapid local organizing can look like and what the soul of our community can be when roused.

Boot: The gutting of small retail and small business

Isn't this virus sneaky? It's neutralized when you're shopping for electronics and home décor at Target but gets totally crazy dangerous when shopping for a hand-made item at a local retailer. It's too risky for a hairdresser and her clients, but fine for an Uber driver carting someone to an outdoor bar. We, like most sane people, realize that restrictions were put in place in the spirit of keeping people safe—but when enforcement is uneven and it results in a projected permanent closure of 50% of small businesses this year, it smacks of a lack of creativity that only guts the mom and pops and enriches the big boxes. Amazon's sales and profits were already ravaging small businesses. Will we ever put that online convenience back in the box? People believe this is not a local issue, but to a local business, nothing is a bigger threat.

After a failed gas tax initiative in 2016, Bend voters saw the light this time, passing a bond that will help ensure the city's traffic (and bike and pedestrian) infrastructure doesn't fall sorely behind its growth.

We've been focused on the virus this year, for good reason. But at what point are the casualties of ongoing closures going to be put on equal footing? From rising homelessness, to chronic unemployment, to rampant increases in overdoses and addiction, to at-risk kids who have now spent the better part of a year away from the school-based lifelines that can help identify abuse, hunger or special needs... we will spend 2021 putting systems back in place that the virus destroyed—but the unintended consequences of all this sequestration and all these closures will take much longer than a year to understand and repair.

Speaking of Glass Slipper, The Boot