Darren Kling stumbled into ballooning, but it's been smooth sailing ever since

Balloons Over Bend is right around the corner, bringing a variety of balloon pilots and balloons to see. Darren Kling, a balloonist of 27 years, hasn't missed the event once. As the founder of Big Sky Balloon Company, Kling has flown his way all around the Pacific Northwest, along with some international flying in Costa Rica.

Once ballooning entered his life, it took Kling about two months to get his commercial license—and he hasn't looked back since. He shares with the Source his perspectives from above, what it's like learning to fly and how his favorite views are right here in Central Oregon.

Source Weekly: Before you became a balloon pilot, what did you want to do? Or was that always in the plan?

Darren Kling: Well, the ballooning part wasn't, but I was always interested in aviation. My dad was an airline pilot so that's probably where it started. I ended up not going to a flight school and just went to a regular university. A buddy of mine I met there had gotten into ballooning through his parents at a young age. I basically got into it through him and it just stuck. You're out of school and trying to figure out what to do with your life and going out and flying balloons sounded like a fun thing to do. Didn't know if it would last or not but here I am, 27 years later.

SW: Do you remember your first flight?

DK: I remember my first solo flight—which is always thrilling and nerve wracking at the same time. There's something about being in a balloon for the first time by yourself that's kind of spooky, because it's so quiet. In an airplane you've got the constant groan of the engine and everything. In a balloon it's just very, very still. My first flight was in Montana and I managed to get a good flight. But then the subsequent flights after that... it's a steep learning curve, I'll put it that way [laughs].

SW: Do you have a favorite flight or a specific route?

DK: A couple of my favorite flights have been these cross-country flights that I'd like to start doing more of. Before I left Montana, I did a flight over Glacier National Park that was a pretty sweet flight. Done one over the Cascades as well. Those are really fun. The normal flight route I have– I fly out of Terrebonne and have a really awesome site area next to Smith Rock. The winds often take me to the Crooked River Gorge and we kind of fly the canyon. Out of all the places I've flown, where I fly almost every day is pretty hard to beat. 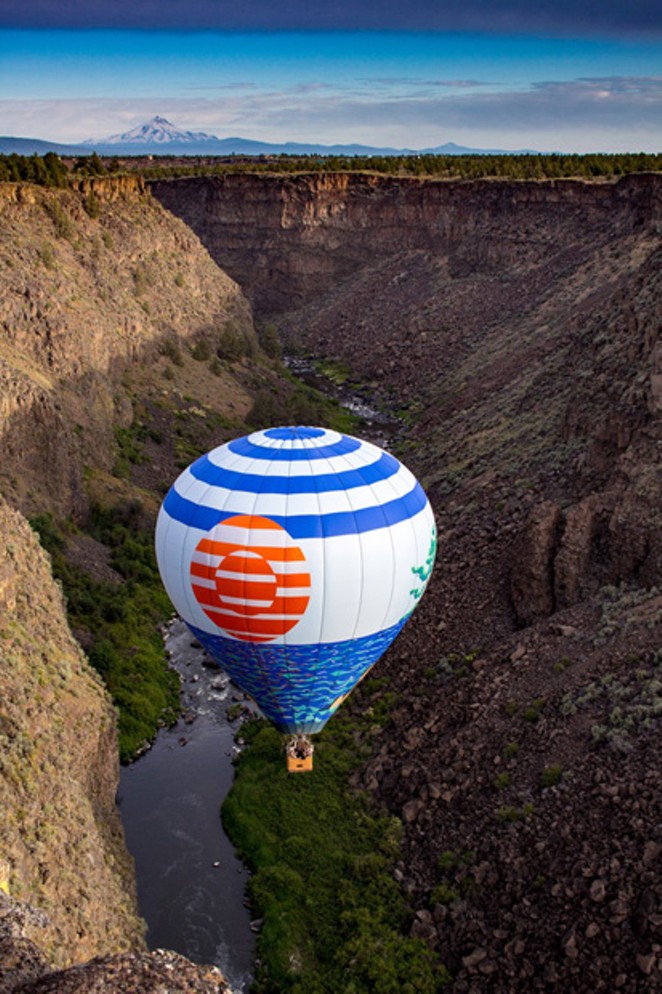 SW: Walk me through the mechanics of piloting a balloon.

DK: It doesn't have any directional control on board. All of the control you have is up and down. You get different wind layers and they move at different speeds and directions at different altitudes. On the surface I might have a wind going to the west but up 100 feet I might have a wind that turns me more northwest, or north. You always have some options on board but it all depends on the winds. You're working to get to areas that have decent landing zones.

SW: Everyone is always talking about the bird's eye view. You get to see that all the time. What's it like for you to experience that angle of the world so often?

DK: You know, I never take it for granted. It does become, when I'm doing it every day– I do have a routine I get into. But I don't take it for granted, the perspective that it's giving me. It's something most people talk about the first time they've gone up. They've lived in the area all their lives and they go up and they're a little disoriented at first. Because it is such a different perspective. I can't honestly say how much it's affected how I view the world, really. But I do art, I make paintings and stuff, so I think that perspective has definitely come through in the past. If it were visible anywhere in my life it would be through my artwork. It's been great.


Editor's note: Balloons Over Bend is put on by Lay It Out Events, which also owns the Source Weekly.