Angie Acevedo, now a student at COCC, made a name for herself at Bend High, where she advocated for immigrants and people experiencing poverty

Last spring, Angie Acevedo gave the senior speech in front of her graduating class at Bend Senior High School—the first person from a Hispanic background to do so in the 110+ years of commencement ceremonies at the school.

Born in Los Angeles, Acevedo and her family moved to Bend when she was two years old. At BSHS, Acevedo established a reputation as a strong student—graduating with honors—as well as an advocate for immigrant families and those experiencing poverty. Now age 19, Acevedo is a student at Central Oregon Community College (along with her older sister) and hopes to pursue a career in human services or politics. 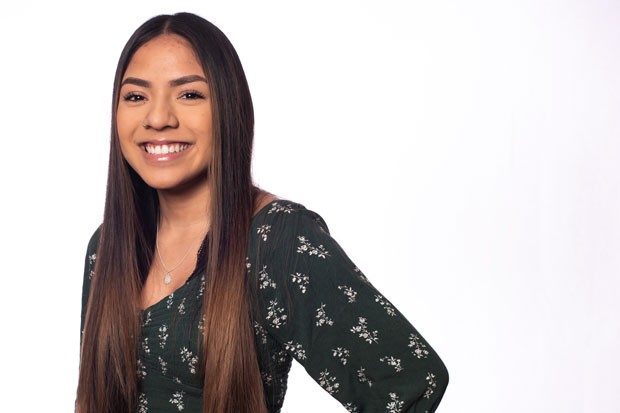 "I’d like to dedicate this award to my parents, who have sacrificed everything for me, and to anyone who has been forced to compromise their treatment in this system due to their race, gender, sexual orientation, economic status, or any other uncontrollable factor. This award and my representation is for you." - Angie Acevedo, Young Hero award winner tweet this


"Grateful is truly an understatement. I am honored to have received the Young Hero Award. I’d like to specifically thank my parents, Morgan Davis, Steve Weatherald, The Office Group, the judges, and the scholarship sponsors. I wouldn’t be in the position I am in today without the unconditional support of these people, and I am beyond thankful that I can further my education with this scholarship as well. I’d like to dedicate this award to my parents, who have sacrificed everything for me, and to anyone who has been forced to compromise their treatment in this system due to their race, gender, sexual orientation, economic status, or any other uncontrollable factor. This award and my representation is for you."

Morgan Davis, dean of students at BSHS, nominated Acevedo for the Young Hero award, saying this in a letter he wrote to colleges on her behalf:

"This passion to create equity in our community has led Angie to be the Vice President of our Cross Cultural Club, where she helped to create the mission and vision statement. Angie has spearheaded projects such as writing Senators and House Representatives to protect the rights of DACA, advocating for changes in gun control, and reached out to students who do not feel connected by bringing them to the Cross Cultural Club." Acevedo also advocated against "period poverty," in Bend-La Pine Schools, attending a school board meeting and requesting the district offer free feminine products at local schools.

Here's what else Young Hero Angie Acevedo had to say.

Source Weekly: Is there someone in your life you'd like to acknowledge?

Angie Acevedo: My mom. My parents... my mom came here when she was 17, and I have just so much respect for them. Everyone has their own struggles and I understand that—right now, for me, going through college and transitioning from everything that high school... I tell her sometimes that I feel like I can't do it, that I want to drop out... but it's just crazy—my parents came here with nothing and they made this whole life for me and my siblings.

I have a lot of respect for my parents because they made it really clear to us not to be angry for the situations we have to go through—not to be angry and to appreciate the opportunities that we have.

SW: You mentioned growing up between two cultures. What do you see winning this award meaning to other people who may have a similar life story?

AA: It's just really hard growing up between two cultures, especially the ones I had to grow up in—they don't always welcome each other. It's kind of sad to see, because you love both of your cultures and you don't want to have to choose.

A lot of kids struggle with issues of identity because they don't know how to deal with it. Like sometimes they feel like they have to choose a side. When I'm here in the United States, I feel like I'm not from here. When I go to Mexico to visit my family, I have an accent and I didn't grow up there, so I'm not from there, either. It's like you're not really from anywhere but you're from both places at the same time. It's really confusing—and I hope I would be a role model, because it's really hard to grow up like that and it hits some kids harder than others, and I just hope I can be an example that you can do something good.

AA: Martin Luther King, Junior. My graduation announcements had a quote from him: "Use me God, show me to take who I am, what I want to be and use it for a purpose greater than myself." For me, when I read that quote, it reminded me to use the opportunities that you have here—use the voice that you have, because you can speak up. Everyone's always like, 'everyone has a voice,' and it's true—but the reality is, not everyone is hurt the same. I feel like I do have some privilege. When last year there was a march downtown to keep the families together at the border, my parents really wanted to go and their friends really wanted to go too, but they were scared because they don't have documents—the kind of stuff like that, I should speak up for other people.

SW: What do you hope for other women in our community?

AA: I hope we all get empowered in our own way, because, like how I grew up—there's a lot of machismo in the Hispanic cultures. I've talked to my parents about it—it's not like they want it to be like that, but that's how they were raised. A lot of Hispanic households, the girls have to do all the housework—that's how I see it, mostly.

More in The Women's Issue