Combatting gender exclusivity in the world of rock climbing

"Our mission is to create an educational space for women (cis, trans, femme) to realize their strength through rock climbing."

Every professional female athlete I've recently spoken to has agreed vehemently on one point: women are harshly underrepresented in the world of outdoor sports. Lizzy VanPatten, the co-founder and owner of She Moves Mountains, quickly realized this for herself after diving headfirst into the rock-climbing scene roughly six years ago. 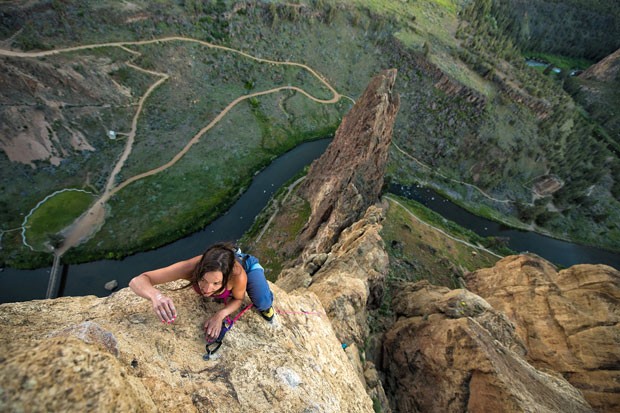 "In all my time climbing, I realized I had never been taught by a woman," she shared. "It's no secret that women are underrepresented, but this is especially true when it comes to rock climbing and guiding."

VanPatten founded She Moves Mountains three years ago as a means to break down gender-related barriers and to combat exclusivity in the outdoors. The organization offers rock climbing clinics and retreats guided exclusively by women, encouraging like-minded ladies to develop their skills in supportive, non-judgmental environments. "When I first started climbing, I felt like the outdoors were only really accessible to human beings that weren't like me. So, I started focusing on women and female empowerment outdoors, but I soon realized that women were being exclusive as well." For this reason, she changed her mission statement to include those who identify as female, not just those who were born that way.

The inclusive organization aims to knock down pre-existing and limiting gender roles while navigating gender-related fear. "My personal mission is to help women overcome the obstacles that might be standing in their way while realizing their own strength and ability," VanPatten said. "If you can do four squats, you're strong enough to rock climb. Women might think, 'Oh, I can't do that, I'm not strong enough,' or they might be intimidated by the dominating male presence. Then they come out to a clinic and realize how strong and capable they truly are."

She Moves Mountains will have its opening weekend for the season March 27, which will include guided climbing sessions, lodging at LOGE Entrada and a special screening of "Pretty Strong" at the Tower Theatre—a documentary that follows 10 of the world's best female climbers.