We're in it now—and by "it," I mean the resurgence of live music and touring musicians/bands. While last year both the music industry and music fans took a hit (the last concert I attended was March 8, 2020), this summer looks to be different, and my recently purchased tickets to two shows at the Les Schwab Amphitheater would jive with that notion. Live music is back—and like myself and others, the amphitheater is ready to rock.

One new component locals have reason to be excited about is the new design of the amphitheater stage. When we spoke to General Manager Marney Smith this past March, she mentioned how the additional, almost 2,000-square-foot increase would better accommodate larger touring acts and bring more touring bands in. This change bodes well for music lovers in Central Oregon, as Bend Concerts has also inked a partnership with Live Nation to bring in a larger variety of acts that is already paying off. This year will be the amphitheater's biggest summer ever. 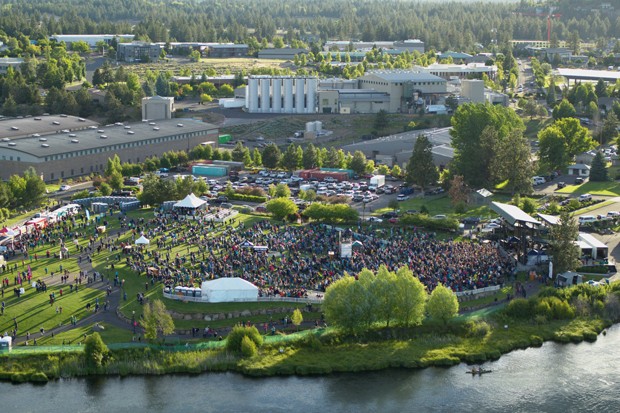 "Our new partnership and the phased build-out of the venue is really exciting. Both changes allow us to attract more bands and varied genres of music to the venue," says Smith. "Our stage now has the structural capacity to support nearly any tour interested in playing Oregon, and the partnership with Live Nation has opened the doors to nationally touring artists we only dreamed about in the past."

In a news release, Sherri Sosa, president of Live Nation's venue management division, said: "From our first visit, we could feel the heart of the venue and we knew we could help bring even more shows to Bend." Sosa also said they are excited to take LSA to the next level, but to ensure it will be done, "without changing the spirit of what makes the place great."

As of this past Monday, LSA has announced 16 different days of concerts—with more on the way.

"There are some really awesome announcements coming up of artists who haven't played the LSA before. One of my favorite things is watching the first-timers playing to the Bend audience at the LSA," Smith said. "It's a really intimate venue and the fan interaction for the artists is pretty special. We have a bunch of those coming up this year."

Re-emerging from the pandemic with this magnitude of hype is both fortunate and exciting—something Smith is well aware of, as are other independent venue owners who have survived the most trying time in history for the music industry.

"The music industry voluntarily shut down at the beginning of the pandemic to help keep people safe. We will be among the very last industries to re-open," reflects Smith. "Because we are a small family-run business and wear many hats, paring down and riding out the economic storms has been something we plan for, so we were prepared. However, reopening is a brutal process after being shuttered for 18 months. It is expensive and labor intensive and we have to decide what is essential to reopening."

The Year the Music Died
The music industry took a big hit in 2020. Will it roar back in 2021?
By Eric Flowers
Local News

Smith and LSA are also signed up as part of the Ready To Rock initiative, a push by the venues of Oregon to get Oregon to the targeted 70% vaccination rate, where herd immunity is thought to kick in. This way, there will be fewer restrictions and live music can thrive just like we remember it—something Smith is looking forward to.

"The Ready to Rock campaign was a collaborative effort between venues across the State of Oregon and is basically an ode to live music. We know that the State of Oregon will lift most restrictions if we hit a 70% vaccination rate—and we need those restrictions lifted to get back to doing what we love. This campaign is meant to draw a direct cause-and-effect line between the population's willingness to get vaccinated so that we can safely gather en masse, and our ability to put on the live concerts and the events they love."