If You're New Here: Redmond Breweries

The Hub City lost one during the pandemic, but is still pouring plenty of locally made beer

In other regions of the country, locals might boast about the lone brewery that bears the town's name. Not so much in this part of Oregon, where craft breweries are as numerous as roundabouts and awesome mountain views. Central Oregon boasts dozens of local beer brands—and for a town of just over 30,000, Redmond punches above its weight with numerous places to try local brews.

If you're new here, this week's Redmond issue is giving you a flavor of what to find in the Hub City—including this list of local breweries. 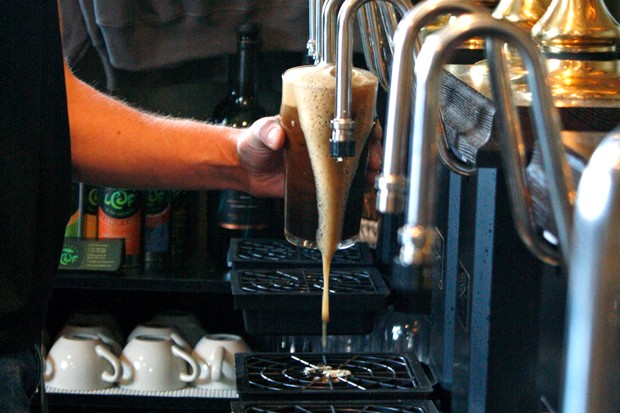 The Northwest is known for its hop-forward beers—so for those looking for something else, Porter Brewing Co. is a go-to. Small-batch, English-style beers are the name of the game at Porter Brewing—smooth and cask-conditioned... and light on the tropical hops flavors. With a new taproom in Bend that opened this year, Porter Brewing's Redmond location is now its "OG" location. Tuesday is open mic night at its Redmond location in Jackpine Court—where you'll also find the uber-cool speakeasy of Gompers Gin.


Two drink spots in one location—what could go wrong?

Speaking of OG breweries, Cascade Lakes Brewing Co. has had a pub presence in Redmond since 1996, a year after the brewery opened. Come for the beer, stay for the horseshoes and fire pits. With happy hour every day from 4 to 6pm, there's plenty to love at this OG spot.

It's hard to miss Wild Ride brewing's pub, right in the heart of downtown Redmond. With a host of food carts outside and a continually lively atmosphere indoors and out, Wild Ride has been serving up the brews, food and fun since 2014.

Getting a nod for creativity for its beer names (Realistic Air Guitar hazy IPA and Poppin' Pils, anyone?) and an incredible, intricate logo featuring a jack rabbit, Initiative Brewing is one of the newer kids on the Central Oregon beer block. A robust food menu and a great patio with frequent live music—along with beers, of course—make this a great stop in Redmond.

The Vault is the home of Kobold Brewing, another longtime local favorite. Nested in the heart of downtown Redmond, The Vault features a healthy lineup of IPAs and other styles. The beer menu tends to always have at least one stout—barrel-aged or otherwise—as well as a porter, pilsner and lagers. Basically, there's something for everyone.

Silver Moon Brewing is Bend's third-oldest craft brewery, but Redmond is where the beer is mostly made these days. The Redmond production facility is typically closed to the public—except this summer, when it's playing host to J Wrigley wines for a summer popup event. Check them out Fridays from 4 to 8pm and Saturdays and Sundays from noon to 8 at the facility at 2095 SW Badger Avenue in Redmond.

Blast from the past

...Last time the Source did a Redmond brew (and cider) tour, three other places were on our tour list. Geist Beerworks closed in late 2020, stating on its Facebook page that it was "moving out of Oregon to a state that is more small business/brewery friendly."


Also now closed is Dry Fields Cider, once located in Jackpine Court, and Smith Rock Brewing, formerly in the 7th Street location where Vine-N-Tap went in—and then subsequently closed this February. The building went up for sale as a turnkey restaurant in March.