"Soulful" is a word that many have probably used to describe Jeshua Marshall's music—you hear the passion in his voice and lyrics, and you can see it when he performs live. Marshall is a true performer. He's toured all over the world as a member of Larry and His Flask and as a solo musician, but one thing Marshall has never done is release a solo album of his own. This fall that will all change, and the release of the album's first single has all signs pointing toward more success for Marshall.

The song, titled "Shoot The Moon," shares the same name as Marshall's album. Featuring crafty guitar picking alongside Marshall's warm and raspy tone, and percussion from Fredo Ortiz (Beastie Boys), "Shoot The Moon" is an upbeat folk-rock track that is perfect for cruising in your ride this summer. Trust me—it really hit the mark on a recent drive to the Oregon coast. When the post-chorus jam hits you're filled with new life and energy. 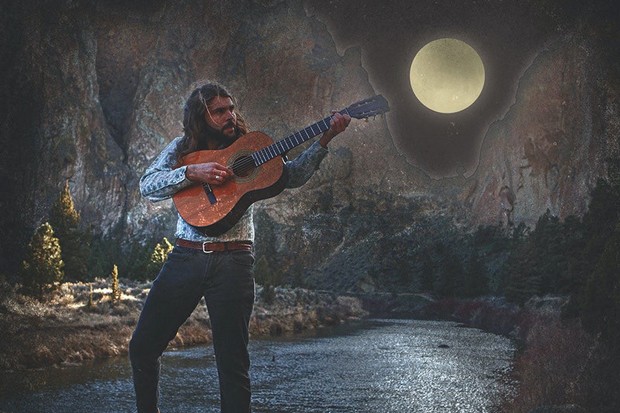 "Shoot The Moon" was first born in 2013 following a breakup and Marshall's attempts at putting alcohol to the side. For some reason this song had been stuck in his head since then, and seven years later Marshall was able to come back to it and sprinkle in some more wisdom, as the song took on a new feel through the lens of his sobriety and new life experiences.

The lead single also comes with an accompanying video (directed by David Gillaspie and Todd Rosenberg) that looked mighty fun to shoot. Filled with "Wizard of Oz" references, many popular stops around Bend and a lot of Marshall as we see him run, bike and dance his way through some of these leftover feelings. You can't tell on camera, but the video was actually shot during a gnarly wind storm.

Focusing solely on solo tunes and putting that energy into an album has looked to be both a successful and productive change of pace for Marshall. In 2020 he released "go go," "No More" and "Life of a Snake." This January he also dropped "Dragonfly." Now we're right on the cusp of an entire album of new Marshall music—one you'll be able to find out on September 10.

Having grown up in the Hub City, earlier this year Marshall shared with me how happy he was to see Redmond growing in such a positive way and how the town is opening more doors for the arts, going as far as saying, "it gives me so much hope for the next generations of my hometown." While the town he grew up in continues to grow, Marshall is doing the same right along with it—and inspiring others in the community with that same hope for the future through his music.

You can currently hear "Shoot The Moon" on Spotify and Apple Music. And while you're at it, go watch the music video on YouTube, too.