In honor of the transportation issue, Source staffers muse on walking on sidewalks—or the lack thereof—#inBend 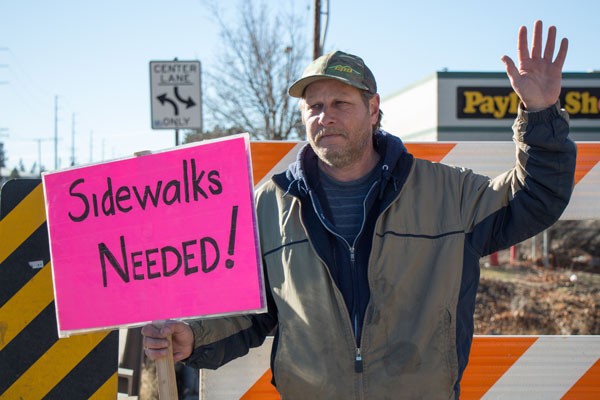 Foray to the Fitness Center

A perilous journey in Midtown

The joys of navigating Bend as a pedestrian start as soon as I set foot off my driveway. There's no sidewalk on this portion of NE 6th Avenue in Midtown—even though we keep hearing about how this street will be a Neighborhood Greenway sometime in the future. Wish it was now.

Step off the driveway with your eyes wide open, because in lieu of a sidewalk, there are undulating waves of black pavement, thrust upward and sideways, either from Ponderosa roots or the fact that my house is built on a giant lava hump. If you're on a bike, these ripples are good practice for those hoping to someday achieve the bunny hop—because really, you're not a true Bendito until you can sport tricks on your bike, if only to avoid local hazards such as this.

The next challenge: making it several blocks to Greenwood Avenue while dodging the cars using this street as a speedy cut-through to Olney Avenue, not much caring that kids and parents and dogs also use this street to access Juniper Swim and Fitness not far away. Two blocks from my house, the onslaught ends for a bit. A benevolent City of Bend recently installed a small stretch of sidewalk here, allowing for two terror-free blocks of walking before ending at Greenwood.

So you wanted to cross Greenwood to get to the park or the fitness center? Silly pedestrian—you'll just have to wait (extensively) for a break in the rush of semis, speeding Sprinters and mom vans that clearly have more important places to be than you do. A crosswalk has been promised here, too, but for now, I wear my heart outside my body every day, knowing my teenager is scrabbling across this "intersection" to get where she needs to go.

Oh wait, I could also hop in my big truck and drive the five blocks to that fitness center. Because that's better for everyone, right?

The sidewalk pilgrimage from Bend High School to downtown

Did you know the distance between Bend High School and Downtown is almost exactly 1 mile? A leisurely stroll along Franklin Avenue will get you downtown in approximately 25 minutes, according to Google Maps. The little blue dotted path on my phone maps however, does not do the route justice. There are many trials one must go through to get from Bend High to downtown.

The first trial is crossing Franklin at 6th Street. This proceeding can take mere seconds to monotonous minutes. You must get your timing right. It's best to avoid crossing while school is in session. Why is this important? High schoolers don't know how to drive, yet they all do it anyway. This means a long line of cars, with fresh new drivers that probably won't see you.

Now, you may be thinking to yourself, do I have to cross the street? You can, of course, stay on the south side of Franklin; however, the sidewalk on this side wanes and peters out. The choice is yours.

The second trial occurs at 3rd Street, where you must cross again. To avoid waiting too long, press the crosswalk button, which has a drone-like voice that commands the obvious: "wait."

After you've crossed, prepare for the last trial: the stinky Franklin tunnel. I recommend a scarf, buff or strong fingers to cover your nose. The Franklin tunnel has an odor unlike anywhere in Bend; a pungent scent of piss, weed and cigarettes, like a stale party that should have died long ago.

As you emerge from the tunnel, give yourself a pat on the back, each person who walks or bikes through the tunnel is counted by the City of Bend to calculate the amount of pedestrian traffic so it can determine how much money to allocate toward sidewalks and pedestrian improvements. Well done, pedestrian.

His real name isn't important, and he definitely doesn't act like one of the heroes from Tolkien's tale—unless you consider civilian traffic enforcement a wizardly act.

He goes about a quarter of a mile at a time, mumbling to himself, only stopping to scream at abusers of the posted speed limit. Gandalf struts down the middle of the street—there are no sidewalks on 11th, or many other streets on the east side—acting as if his mission in life is to curtail bad driving habits. And there are many of them: delivery trucks blow through stop signs; late-for-work soccer moms in Jeeps or Honda Odysseys blast through the school zone like they're on the Parkway.

Gandalf isn't shy or courteous. He'll meet the perpetrators head on, often in the dark, his eyes glowing in the headlights of the offender's metal steed, casting them off with a bellowing, "Slow the fuck down." He's also diligent. Four feet of snow, Gandalf is there. Wind, rain, sleet—he's more reliable than the U.S. Postal Service, delivering his words of wisdom: "Slow down you asshole, this is a school zone."

Orchard needs the rest of the Fellowship. Frodo and Sam, their hairy feet ambling barefoot down the sidewalk-less streets, spewing vitriol at speeders and other evil-doers.

For now, the neighborhood will have to live with the wizard, and his daily walks don't go unnoticed.

My only wish: That just once, he would deliver the classic "Lord of the Rings" line, while swinging his dog leash like a bull whip.

You know the one:

Where the Sidewalk Ends

I took a stroll southbound on 3rd Street from my apartment near the corner of Reed Market Road and 3rd Street to Fred Meyer—a route that I often see pedestrians take, grocery bags in hand. I immediately noticed that the familiar figure, usually rocking out on air guitar in front Little Caesars Pizza, is not there. A little bummed, I continued my trek.

My first impression: the sidewalks are basically brand new with nice curb ramps for wheelchair accessibility. This wasn't surprising, as the city just wrapped up a $2 million joint project between the City of Bend and the Oregon Department of Transportation that included creating additional sidewalks and upgrading curb ramps to meet Americans with Disability Act guidelines. "A+" so far, for accessibility and shape of sidewalks.

As I continued down Third Street, which turns into Hwy. 97, the trip became a little sketchy. Some of our readers may have seen individuals standing on the shoulder of Hwy. 97 near Payless ShoeSource, holding signs with phrases such as, "Sidewalks Needed!" over the past several months. This is where a canal flows under the highway and it is also where the sidewalks end, making way for a small bridge crossing the canal. The sidewalks continue on either side of the bridge, but the stretch of road over the canal offers only a narrow shoulder for pedestrian traffic.

A rough estimation of the width of the shoulder walking southbound down Highway 97 is a little over 2.5 feet wide—but it seemed to vary in sections of the bridge. While I made it safely over the bridge with all of my appendages on the right side of the white line, it's definitely not a comfortable distance away from often careless drivers on a very busy roadway.

Grade: C (demoted from an "A" because of this sketchy passage over the canal)


Do you know of a sidewalk in town that needs a little work? Submit a Barrier Removal Request to the City of Bend online.