It's North(west) vs. South in a Civil War reenactment 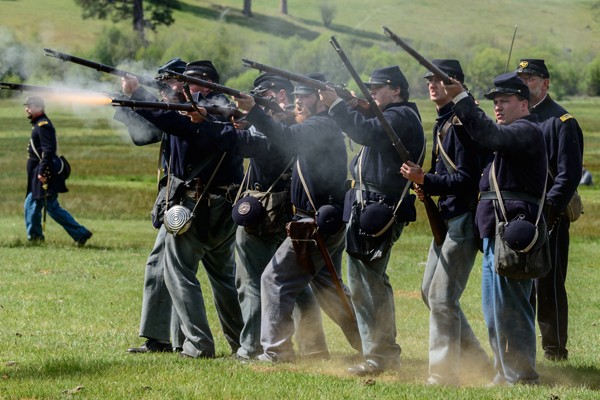 Forget haggling with your Congressman at the next town hall.

The president's coming to Central Oregon.

No, not that president. This one's even more famous. Like, $5 bill famous. That's correct. President Abraham Lincoln's scheduled to make an address Saturday during the first day of the Civil War Reenactment at The House On Metolius Meadow north of Sisters.

And, according to the program, he'll be taking "polite" questions from the audience. (Let's hope Fox News doesn't show up.)

The Civil War reminds us that way before the current political turmoil, the United States had deep divisions. Some were solved through vigorous debate. (Lincoln-Douglas, anyone?) Others wound up on the battlefield.

This weekend's event continues a long tradition. Large-scale reenactments go all the way back to 1913—which marked the 50th anniversary of the Battle of Gettysburg. That one brought more than 50,000 actual veterans together. This time around, several hundred reenactors are expected to take part in activities ranging from mock battles (with cannons and muskets) to 1860s-era medical and fashion exhibits.

So what continues to draw them more than 150 years after the final battle?

"The Civil War was the period that truly shaped America into the modern nation we are today," says Bend reenactor Matt Cleman, who first signed up 10 years ago. "Understanding that period of history is necessary to understanding how we are now." 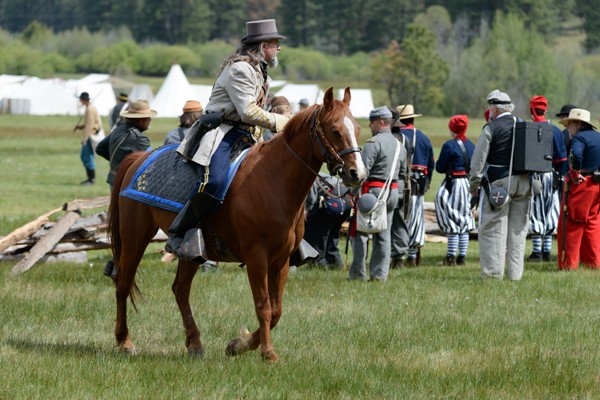 "When I put on the uniform, it's often as if I can feel Archie in my heart, and I feel a welcome opportunity to let him speak to visitors and other reenactors," he says. "I try to approach reenacting as if the war is actually occurring, as if the past is now present."

Turns out this Central Oregon spot's just perfect for "soldiers" such as Archie to relive one of America's most agonizing periods. It's a full five acres of mountain meadow setting. "The House On Metolius site has few, if any, intrusions of modern things," Cleman says. "There's no road noise, for example. It's easy to experience time travel.  Plus, it's just beautiful."

The Northwest Civil War Council, which stages the event, believes that "as savage and tragic as it was, [the war] still represents the centerpiece of our history and has important effects for us as a people even in the 21st century." The NCWC makes sure the event includes more than just battle recreations. Visitors can also experience the camps "to see and touch how the soldiers lived. Civilian life is also portrayed through examples of fashions, cooking, music, dances, secular and spiritual life," according to the Council.

Reenactors take "realism" quite seriously during these events. It's not a costume party; participants are trying their hardest to make it truly interactive, with an element of going back in time. Cleman first felt that way during a visit to Gettysburg he took as a 12-year-old.

"It's a success if visitors feel, like I felt at Gettysburg, that they've met a real, living person from the 1860s," he says.  "When that happens, we learn that the motivations and concerns of people in the mid-19th century were very much the same as those of people in the 21st century.  Technology changes, but people don't change. That's what I want them to realize as a result of visiting a reenactment."

Both days open with 9 am infantry drills. You'll also witness bayonet and musket practice while watching the cavalry ride in. After lunch, there's an artillery demonstration and even a "Fashion of the 1860s" exhibit. The day's final "Afternoon Battle" takes place at 3pm. You will, however, notice at least one thing you wouldn't have seen during the actual hostilities: food and souvenir vendors.

Other than that, there's not much standing between you and an authentic 19th century day trip. As Cleman notes, we could stand to learn a lot about our current predicament by examining this period. "Lincoln said, 'Human nature will not change. In any future great national trial, compared with the men of this, we shall have as weak and as strong, as silly and as wise, as bad and as good. Let us therefore study the incidents of this, as philosophy to learn wisdom from, and not as wrongs to be revenged.'"

With eloquence like that, who wouldn't want to spend some quality time in the 1860s?

The House on Metolius, Camp Sherman