A Ballot Measure on Mirror Pond?

Bend man works toward a public vote to block City funds for dredging, with stipulations

What to do with Mirror Pond—the body of water that sits behind the 110-year-old Newport Dam on the Deschutes River—might be one of the most contentious topics for Benditos in recent memory. Many people living near the pond, and some that own businesses that overlook it, want the City of Bend and the Bend Park and Recreation District to help fund the over $6 million project to remove silt from the river's bottom. Some of those same people see the pond as "iconic" and want it preserved through dredging.

Others favor a "do-nothing" approach. Still others want to see the dam removed and the river put back to its free-flowing days. But that might not be possible since PacifiCorp—which owns the dam and sells its hydropower to nearby Pacific Power customers—decided in 2016 to keep the dam intact for an unforeseen amount of time. This leaves the pond in flux and has set off countless public meetings, private meetings between Mirror Pond Solutions—the group that owns the ground under the pond—and BPRD.

On Monday, the Bend City Council had a listening session—yet another public meeting—where dozens of people came to speak up for their side.

Last week, Spencer Dahl, who lives a few blocks from the pond, filed paperwork to get a measure on the ballot this November which would prohibit the City from contributing to the dredging project, unless PacifiCorp commits to keeping the dam and the pond in place for at least five years. According to Anne Aurand, the City of Bend's communications director, the city recorder has certified Dahl's petition and the city attorney's office has prepared the ballot title.

In order to get the item onto the November ballot, Dahl has until Aug. 7 to get 15 percent of registered voters in Bend to sign his petition. According to the Deschutes County Clerk's office, Bend has nearly 67,000 registered voters, meaning Dahl would need about 10,000 signatures.

Dahl's ballot measure would also bar the city from spending money on dredging until a hydrologist completes a report detailing current sediment levels and compares them to levels found in a 2005 study.

The City, BPRD and PacifiCorp have each pledged $300,000 toward dredging. In December 2018, the City Council discussed the possibility of raising the remaining $5.5 million through a 1.5 percent increase in franchise fees charged to Pacific Power customers, but that was before the City Council got two new members.

The funding debate will continue at the May 1 City Council meeting.


Deciding how to handle sediment in Mirror Pond is far from a new conversation. The City last dredged the pond in 2004.

In 2009, the Bend City Council created the Mirror Pond Steering Committee to once again address sediment buildup. The committee was comprised of representatives from BPRD, the City of Bend, environmental organizations, business and neighborhood associations and other stakeholders. That committee later formed in 2013 the Mirror Pond Ad Hoc Advisory Committee to negotiate options with PacifiCorp. 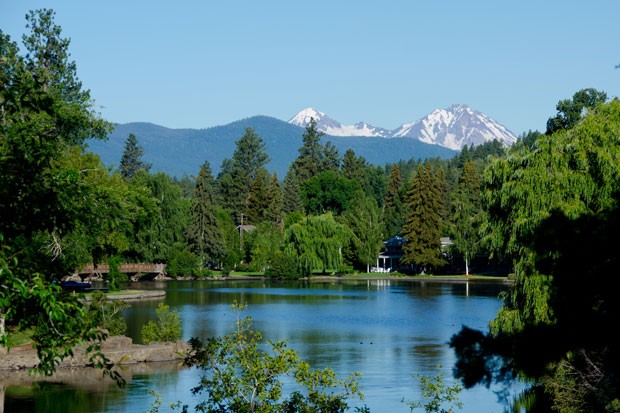 In December 2013, the City Council and the BPRD board unanimously approved a resolution to affirm the recommendation of the Mirror Pond Ad Hoc Advisory Committee to pursue the preservation of the pond. Community meetings and online surveys had resulted in input from more than 4,000 people, indicating an even split between those who preferred the river to flow in a more natural manner versus those who favored the pond, according to the BPRD memo. A third option would have reintroduced habitat to the banks of the river along Drake Park, created a fish passage and preserved the water elevation of Mirror Pond. Seventy-four percent of those polled preferred this option—but that one was taken off the table, because in 2016, PacifiCorp decided to retain ownership of the dam, after company officials had previously stated a desire to dispose of it.

In March 2015, BPRD's Board and the City Council passed a resolution to keep Mirror Pond near its historical form, enhance habitat, maintain or improve public access, identify funding other than tax dollars or reduce the frequency and quantity of future sediment efforts, according to the BPRD draft.

Mirror Pond Solutions purchased the land from the McKay Trust under the pond in 2015, and last year, paid for and obtained permits for dredging from various state and federal agencies. Since that time, it signed a non-binding memorandum of understanding with BPRD, calling for both entities to work together to resolve the Mirror Pond Project.