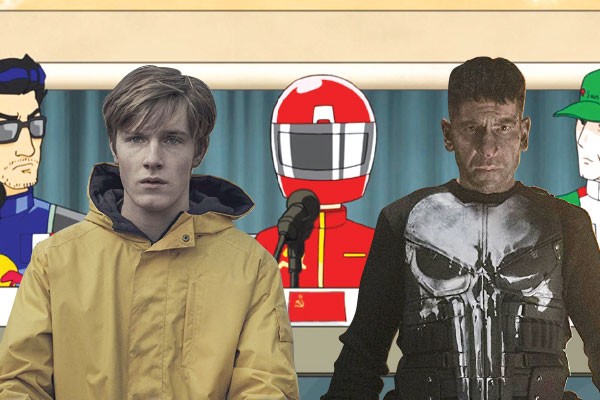 Welcome back, everyone! We took a few weeks off because of all the exciting movies coming out, but it's time to dive back all things .

It's been a while since we've looked at some of the brand spanking new podcasts, and it's downright intimidating how many there are to choose from. Al Jazeera has a new podcast network called Jetty and its debut show is simply fascinating. Hosted by Carvell Wallace, "Closer Than They Appear" isn't just a new interview podcast, though it uses that format to take on a wide range of topics Wallace feels are plaguing America. The premiere episode sees Carvell interviewing Mahershala Ali from last year's "Moonlight," and it's a perfect place to start.

If diving into another open-ended series just seems like too much, there's also the six-episode true-crime series, "Dirty John," a chilling story about a sociopath who ruins the life of a doomed and lonely woman. For fans of "Serial" and "Making a Murderer," "Dirty John" is chilling in all the ways only a truly great podcast can achieve.

The rest of December is downright packed with interesting releases, so the snow will bury us soon and we have an excuse to stuff our faces with pop culture. The underrated "Detroit" finally sees release on Dec. 12, and while it's a movie that's certainly no fun to watch, it still tells an important story that, as Americans, we shouldn't let ourselves forget.

Season seven of "Game of Thrones" is also released on Dec. 12, and since we have at least another year to wait for the final season, we might as well get used to picking apart everything we've already seen. "Thrones" definitely sped up the storytelling last season, so season seven will definitely be a ton of fun to rewatch. I mean, there was a massive battle or hugely dramatic stand-off in every. single. episode. I miss the show already and it's not even over yet.

I don't know about you, but I'm completely obsessed with the new Netflix series "Dark," a mesmerizing hybrid of "Stranger Things," "Top of the Lake" and "Hemlock Grove." I haven't finished all 10 episodes yet, but "Dark" is such a weird and unpredictable show that it sticks in my brain long after each episode has ended. It's initially about the disappearance of some young boys in a small German town (the show is subtitled, but you can choose to watch it dubbed...philistine), but it eventually expands into an addictive sci-fi horror tale filled with creepy caves, a deadly forest and time travel. Trust me on this one.

Sure, there are other fun things to binge on Netflix, such as "Punisher" or Jaden Smith's hilariously terrible anime series, "Neo Yokio," but "Dark" is definitely where it's at.

If there's anything you think I should take a closer look at in the realm of Podcasts, Netflix or pop culture in general, shoot me a line at Jared@bendsource.com.