A Choir for The Rest of Us | Culture Features | Bend | The Source Weekly - Bend, Oregon

A Choir for The Rest of Us

Sing like a rock star—even if you aren't one 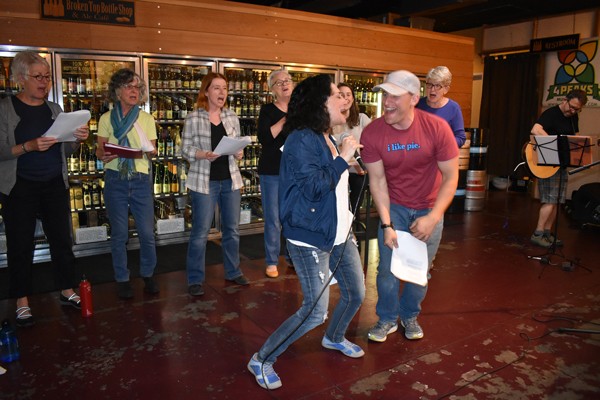 There's a reason the Lukas Graham song, "7 Years," has rung up a half billion hits on YouTube. It's one of those incredibly accessible ballads even the most cynical among us can't help but latch onto: simple, sad, emotional and uplifting all at the same time.

But there's another reason: It's awfully fun to sing!

But where would you feel comfortable belting out the lyrics to a song like this, using your very own voice? The car would work (if you're driving alone). Or the shower. People are capable of all kinds of odd behavior out in the world, but somehow singing requires total and complete isolation.

Fear not, secret singers! You're about to become rock stars. Or at least feel like them.

On an otherwise random Monday night, I conjured up the nerve to go out and sing this very song (and four others) as part of the hippest choir in town. Nearly 20 of us happily show up to do the same thing. We've gathered here to sing, loudly; with no fear, no judgment and endless support.

Did I just trip and fall into an old episode of "Glee"?

Not exactly. We're all part of Sing Bend's weekly Public (Rock) Choir inside Broken Top Bottle Shop. Apparently, choir's not just for church hymns and Christmas carols. Bend singer and teacher Deena Kamm, who has a long, impressive list of professional singing credits in Los Angeles (including a stint opening for Pat Benatar), leads the group with boundless energy and encouragement.

"I've heard countless people say they would never sing in public or how they have such 'terrible' voices,' says Kamm. "And I realized that we've done a great disservice to each other in our culture by assuming only the gifted, elite, trained and 'good' voices should ever open their mouths to sing."

The evening starts with some vocal exercises to warm up. Then we launch into song, backed by both a keyboard and a guitar player. (Don't try that in the shower!) Kamm also plays keyboard, which she uses, when necessary, to help teach the song.

First, the opening instrumental part—then we come in:

"It was a big big world, but we thought we were bigger/ Pushing each other to the limits, we were learning quicker..."

And just like that, we're in fantasy pop star heaven. "It's about all of us getting together and singing and having a good time," says Nina Braga, who joined the group after her aunt attended first. "You come here and it's this release, and you find that you're singing through the rest of the week."

Robert Bussabarger joined when he caught the group in action one Monday night. "I just decided to pop in and I heard them singing," he says. "They welcomed me with open arms. It seemed pretty cool."

Kamm chooses several different songs for the choir. Besides "7 Years Old," there was Bill Withers' "Lean on Me," the Violent Femmes' classic anthem "Blister in the Sun," Edward Sharpe & The Magnetic Zeros' "Home" (complete with spoken voice solos) and a U2 medley Kamm arranged herself.

"I tend to pick songs that allow for big emotions to come through, because I think that's what fuels most people's desire to sing, she says. "I also try to keep it multi-generational." The choir seems to love the selections.

"Most a cappella groups sing barbershop quartet," says Jane Routt. "This is a lot more fun, and more natural."

Choir members do get passionate while singing. Some close their eyes; others sway to the music. Everyone's in the zone. That's partly due to the songs, but mostly due to Kamm, who consistently emits positive energy that makes us singers feel safe.

"All the successes I've had in my musical career pale in comparison to how good it feels to watch a regular, non-extroverted, shy, quiet human—sometimes with debilitating stage fright—feel comfortable enough to take a microphone and sing a solo part out of their own free will," Kamm says, "and rock it!"

The choir's first official performance takes place Saturday around 2pm at the Courtyard of 9th Street Village. (909 SE Armour Rd., Bend). You can even join in!

Look for the Calendar Tap feature the first issue of each month, in which a Source staffer closes their eyes, "taps" an event in our calendar, and then tries it out.