A Circus of a Halloween | Culture Features | Bend | The Source Weekly - Bend, Oregon

A Circus of a Halloween

October 29, 2020
comment
Halloween festivities are ramping up, despite COVID-19 restrictions, and amid this wild year, Venardos Circus is offering some live entertainment. Its “Spooky Spectacular” show in Redmond happens throughout the last week-end of October. For those looking for somewhere to wear those spooky, cool or funny costumes, this would be the place, as costumes are encouraged.

Throughout the pandemic, the traveling circus—which also made a stop through Central Oregon last year—has stayed afloat by offering virtual performances. For the cast, the “Spooky Spectacular” is the first live show of the season. The show will additionally be offered online, but for those who want to attend in person, they can expect Broadway style, animal-free performances and feats of greatness. A recorded replay will be offered to ticket holders for 30 days after the show.

“In May we provided our first livestream. We had never done one before, and we were not a video production company,” explained Kevin Venardos, ringmaster and founder of the circus, who was once a ringmaster for Ringling Bros. Circus. “I didn’t know if it was going to work. I didn't know if people would want to pay money for a circus show that they couldn’t see in person.”

Tech issues are another factor. The technical elements of delivering a high-quality and consistent signal to an audience are not necessarily plug-and-play, Venardos said.

“We had to learn from the ground up about computers and cameras and different kinds of software. I'm grateful that we invested in the technology and learned how to produce a virtual experience, because it has really paid off. We are seeing people all across the country and even in different countries who are buying tickets to see the circus.”

At the Redmond shows, audiences will sit at socially distanced seating pods spaced 6 feet apart from the stage and other pods. Guests will have their temperature taken at the door and wear masks until seated. Cast members will also be equipped with masks at all times during the show. Concessions will be available, but the show’s or-ganizers encourage people to order their snacks online to avoid extra contact.

“I am taking all of the needed protocols for our live show; we’re doing just as much as Disney,” Venardos re-marked. “Families that really want safety measures in place will know that we're following through 100 percent. We are doing everything we can to create an environment that people will feel good about being there.” 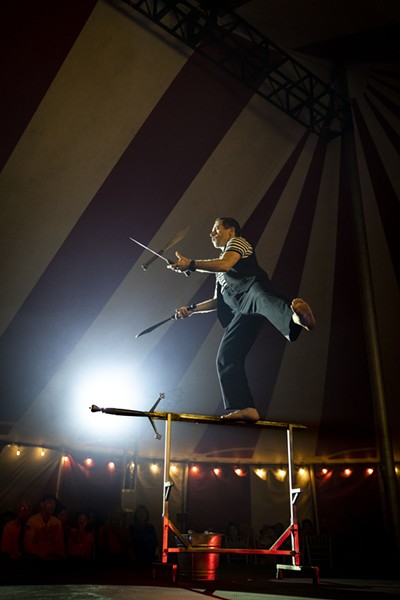 For Venardos and his crew, the act of bringing people together—and doing it in the safest way possible—is par-amount.

“I will hold my head high knowing that the only way is forward,” he said. “All of these performers need to work, and all of the families out there need a reason to smile. We are all bombarded by so much negative data and stimuli that sometimes we are left believing that there is no hope and all we can do is hide in our homes, I don't believe that.”

Venardos Circus will be live in Redmond at the Deschutes County Fair and Expo Center from Oct. 29 to Nov. 1. Tickets are available at venardoscircus.com.

Jess McComb is an intern at the Source Weekly but she'd like to pretend she's a full time employee. Her current occupation is high school but she prefers the title 'journalist.' Hobbies include: being the best female skier on the Mountain, color coordinating outfits, obsessively working out and bragging about...
More