City Council will vote Dec. 4 whether to support the plan's progressive actions and goals

Imagine a forest 50 times the size of the City of Bend—about 1 million acres. This is what would be required to offset the amount of greenhouse gas emissions the city releases into the atmosphere every year from vehicles, homes and businesses, according to scientists who contributed to the Bend Community Climate Action Plan. They presented to the Bend City Council last Wednesday. 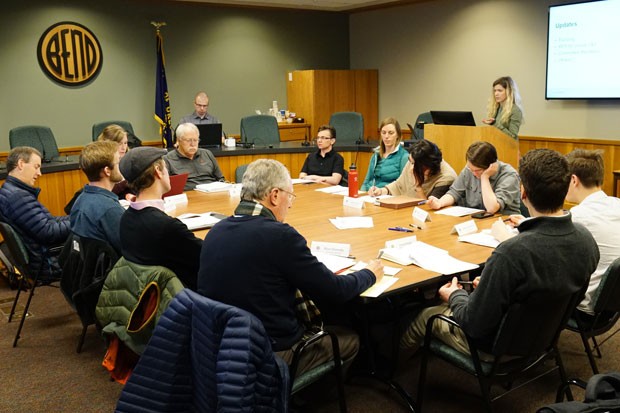 The CCAP has been in the works for three years, since Bend City Council passed Resolution 3044 in September 2016 with the goal of creating a city-wide roadmap for reducing fossil fuel consumption by 40% by 2030 and 70% by 2050. The plan is a publicly supported response to global temperature increases that a majority of climate experts believe are due to the combustion of fossil fuels including coal, oil and natural gas. Locally, climate change could manifest as more intense wildfires, reduced snowpack in the Cascades, flooding of the Deschutes River as snow turns to rain, and an even greater likelihood of drought during summer months, according to the Third Oregon Climate Assessment Report, published by the Oregon Climate Change Research Institute in 2017.

Bend's CCAP is less about doom and gloom and more about offering empowering solutions, inclusive of nearly every sector and citizen who wants to make changes and contribute—whether through investing in a stronger insultation envelope for their home, or spearheading a community solar energy project. Other strategies suggested in CCAP include developing technologies to store energy from wind and solar on a microgrid for Bend buildings, or strategies to recycle and reuse more construction and demolition materials.

The City Council selected 13 applicants to be on its Climate Action Steering Committee which included people from the business community, environmental organizations, local governments, experts on fossil fuel reduction and two representatives under the age of 18. The group was tasked with creating what became a master list of 42 actions and 20 strategies that addressed four sectors identified as the biggest contributors to greenhouse gas emissions: sources of energy supply in Bend (i.e. Pacific Power), transportation within the city, energy consumption in local homes and business and the community's waste stream.

City leaders hired Cassie Lacy as sustainability coordinator to manage the process, and invited community members to the table through pop-up events, public surveys and workgroups. They also invited traditionally underserved groups, including seniors, the Latino community and the Bend Economic Development Advisory Board to weigh in.

“I feel like I have not seen [other plans] or spoken to other people who were charged with such a heavy focus on volunteer action. But we accepted responsibility for where the Council—and the greater community by extension—feel like we should be.”—Cassie Lacy, City of Bend sustainability coordinator tweet this

While other cities around the globe have implemented climate action plans, Bend's is unique because its success relies almost entirely on voluntary buy-in from other public agencies, the private sector, other community organizations and local people.

"I feel like I have not seen [other plans] or spoken to other people who were charged with such a heavy focus on volunteer action," Lacy said. "But we accepted responsibility for where the Council—and the greater community by extension—feel[s] like we should be."

The committee reviewed dozens of action plans and included strategies inspired by other communities around the U.S., customizing them to fit the needs of Bend. Examples include recommendations to build an energy-producing biodigester at Bend's wastewater facility, installing solar panels on public buildings and converting the City's gas-powered vehicles to electric when they need to be replaced.

One of the more ambitious aspects of the proposed plan is transitioning to a 100% renewable energy supply in Bend by 2025, a goal that Mike Riley—executive director of The Environmental Center—believes could have one of the most substantial impacts on carbon reduction. In Bend, Pacific Power and Central Electric Cooperative supply most of the city's energy, using a combination of coal, hydro-electric and nuclear. The Oregon Clean Energy and Coal Transition Act requires Pacific Power to supply the grid with 50% renewable resources by 2040, which will contribute 51% of the plan's carbon reductions.

The proposed plan contains just one mandate: a Home Energy Score—which would require home sellers to have an energy-use audit before placing their house on the market. The process takes one hour, covers 40 data points and currently costs about $125—at least in Austin, Texas—where audits have been required for the last decade. Riley compares the process to learning how many miles to the gallon a vehicle burns before buying. The Central Oregon Association of Realtors does not support the proposed mandate.

Lacy concludes that although the committee and the community have been working on the plan for over two years, it's really a first step. The Bend City Council must first vote on the plan Dec. 4. If the Council passes it, councilors will appoint a new steering committee to oversee the plan's execution. The committee will evaluate and present the strategies to the City Council one at a time, and anything that requires funding will be vetted publicly through the biannual city budget planning process and future City Council meetings.

Lacy said the most gratifying part of the process was working with dozens of volunteers who donated their time and knowledge.

"You couldn't do this alone," she said. "I'm blown away by the talented and passionate people in our community that want to make this a great place for generations to come."