A Cloud Over Solar Power?

In the wake of new tariffs on solar energy, local companies say now is the time to buy 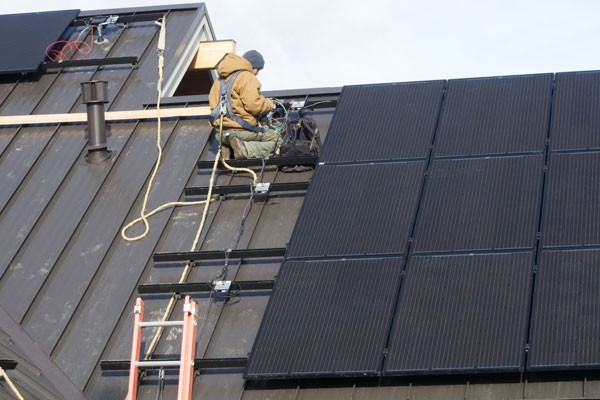 Their bodies packed deep inside layers of clothes, Carhartt jackets shielding them from the wintry mix, Rob Sloan and Travis Trondle haul solar panels up a fiberglass ladder. They clip into the protective roping attached to the metal roof and carefully make their way up the pitch, the weather threatening to turn the roof into an ice rink. Fortunately, the weather holds and the employees of Bend's Sunlight Solar are able to install 43 panels on the roof of a custom home in The Tree Farm subdivision in Bend.

Still, the future of solar may be as slippery as snow on that metal roof.

According to the Solar Energy Industries Association—the national trade association for the U.S. solar industry—Suniva, a Chinese-owned, U.S. manufacturer of solar products, filed a petition with the U.S. International Trade Commission, asking the government to put its thumb on the scale of the U.S. solar market. After reviewing the petition, President Donald Trump placed a 30 percent tariff on imported solar cells and panels—most coming from China.

The SEIA has come out strongly against the president's decision.

"With tariffs, you are throwing the baby out with the bath water," Abigail Ross Hopper, president and CEO of SEIA, wrote in a press release. The group said the decision to add heavy tariffs to imports will effectively cause the loss of roughly 23,000 American jobs—this year alone—and will delay or cancel billions of dollars in solar investment.

"A tariff at this level will eliminate, not add to, American manufacturing jobs," Hopper wrote. "There were 38,000 jobs in solar manufacturing in the U.S. at the end of 2016, and all but 2,000 made something other than cells and panels, the subject of this case. There are currently more than 600 U.S. production facilities and 36,000 American solar manufacturing jobs making something other than cells and panels—manufactured metal racking systems, high-tech inverters, machines that improved solar panel output by tracking the sun and other electrical products—and all of those companies will be affected by these tariffs driving up prices."

At the local level, there are some winners of the imposed tariffs. SolarWorld Americas, a subsidiary of Germany-based SolarWorld—which has a manufacturing plant in Hillsboro, west of Portland—is hiring back some of the 300 staff that were laid off in July of last year. According to Ben Santarris, SolarWorld Americas' head of corporate communications, the company plans to bring back 200 employees by the end of the year, bringing its work force up to 500 people.

At Bend's Sunlight Solar, which specializes in solar electrical systems for homes and businesses, the reaction to the tariffs is a mixed bag.

"The 'Solar Coaster,' as we lovingly call it in the industry, never ceases to keep us on our toes," Sunlight Solar's President and founder Paul Israel told the Source Weekly.

Israel says the tariffs have positives and negatives for his business. On the positive side, he says China was found to be unfairly trading, and this practice led to impacts on the domestic industry.

"Hopefully, this just might give some impetus to domestic and foreign manufacturers to create new and more U.S.-based manufacturing. Manufacturing creates a lot of high paying and skilled jobs," Israel said.

On the other side of the coin, Israel said the cost of solar panels will go up approximately 30 percent, with solar panels being about 20 percent of the overall cost of installing a solar system. What this translates to the consumer is the average system will go up anywhere from $1,000 to $1,500 to install, and adding one to three additional years to the timeline for making the systems pay for themselves.

"To a large extent, a solar system purchase in a financial one, so pushing out the financial return is not fun for us," Israel said. "I estimate our market will drop approximately 11 percent from 2017 to 2018."

Sunlight Solar, which has five offices in the U.S., purchases more than half of its cells and panels domestically—including SolarWorld's products—and the rest from overseas.

The tariffs were less than originally requested on behalf of Suniva Inc., the Chinese-owned, U.S. manufacturer of solar products. Suniva filed for bankruptcy in April 2017. The U.S. subsidiary of SolarWorld also sought the tariffs.

"With tariffs, you are throwing the baby out with the bath water." —Abigail Ross Hopper tweet this

Isreal agrees with the SEIA's gloomy outlook on job cuts within the industry.

"A lot of the utility scale projects—think power plants of solar—the ones east of town or by the highway heading toward the airport, these are extremely cost sensitive. So yes, SEIA's estimate I feel is correct."

More Tax Breaks for the Consumer

The Consolidated Appropriations Act, signed in December 2015, extended the expiration date for solar thermal technologies, and introduced a gradual step-down in the credit value for these technologies.

What this means to the consumer: For solar-electric property, people can claim 30 percent on federal taxes of qualified expenditures if the service is placed by Dec. 31, 2019. In 2020, owners of new residential and commercial solar can deduct 26 percent of the system's cost from their federal taxes. The percentage goes down to 22 percent in 2021. In 2022, the federal tax incentive goes away for homeowners, but remains at 10 percent for commercial users.

While the president appears to be making moves that hurt the renewable industry, Oregon's already on path toward a more renewable future. During the 2016 session, the Oregon Legislature passed the Oregon Clean Electricity and Coal Transition Law, meaning energy for Pacific Power customers in Oregon will be coal-free by 2030 and renewable resources will be brought online in an affordable way. It also helps in-state development of small-scale renewable projects, creates a community solar program, and encourages further enhancement to the electrification of the transportation system.

PacificCorp, Bend's largest electrical utility, gets its power from a multitude of sources: Coal, hydroelectric, natural gas, biomass, wind, geothermal and an unnamed source. According to its website, about 63 percent of PacificCorp's power comes from coal generation, or burning coal as the primary fuel source. Oregon only has one coal burning plant—Portland General Electric's Boardman Plant—that's scheduled to shutter in 2020.

"We need a public and political outcry for more solar on homes and businesses." Isreal laments. "With the proper commitment, the U.S. could generate a majority of all the power it needs from renewables. The industry has demonstrated decreasing cost and we have delivered. Now is the time to put the 'pedal to the metal' (on an EV of course) and commit to solar both federally and locally."

If you choose to believe Visit Bend's information on the number of sunny days we Benditos get—a reported 158 days per year, with an additional 105 days that are mostly sunny and many of the remaining days providing substantial sunshine, according to VisitBend's website—then solar power makes sense.

"The call to action is if you want a system the tariff hasn't affected panels we have in stock. So first come, first serve," Israel said.

"The next few weeks are the time to buy."