In honor of the Dog Days of Summer issue, the Source names its (informal, not legally binding) Pet Mayor of Bend 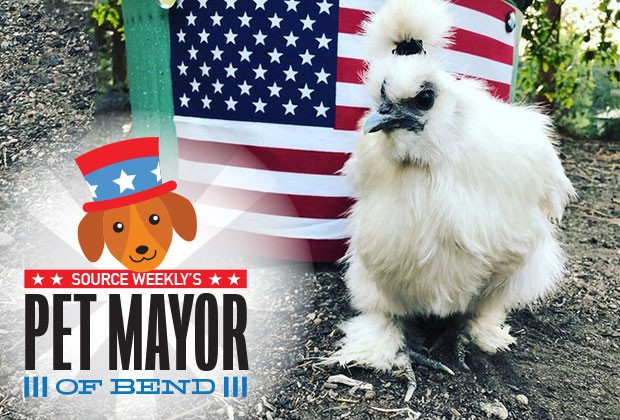 It all started when we did a recent Source Spotlight on Dave Danek at 9th St. Village, who told us in passing that a resident cat at Bright Place Gallery, Leonardo F. Bend, was in the running for mayor of Bend. It's not a joke—and judging by the letter we received from Leonardo this week, he's pretty serious about winning the actual Bend mayor's race.

From that, and since our Dog Days of Summer issue was soon upon us, we thought, why not hold a contest for all pets of Bend—the many, the overly beloved—to put their paws in the ring for Pet Mayor?

With that, our contest was born. We put it out on social media and in our paper, and a proud few emerged as front runners. In the end though, it was Blanco the Silkie Chicken who won our hearts, and who stands victorious as the Source Weekly's Pet Mayor of Bend in 2018. Never mind that her name means "white" in Spanish; neither race nor creed was a factor in this particular election.

Here's a little about Blanco, submitted by her human, Jasmine Barnett:

The Art of Not Giving a Cluck

Platform: Why fight like cats and dogs when we can come together like birds of a feather!


Passion: Free range humans and animal rights. She is vegan. And loves the '80s.

Blanco even starred in a 72-Hour Filmmaker Scramble short film in 2017!


I, Kiki O, am announcing my candidacy for Pet Mayor of Bend. At age 14 I have the maturity and wisdom for the job. I also have the experience, having 1) marched in the 2018 Bend July 4th Pet Parade; 2) been the smallest dog in the 2016 Sunriver K9 Keg Pull; 3) hiked to Green Lakes; and 4) regularly paddle boarded on the Deschutes. I have trusted advisors in big brother and sister Lab mixes Frank & Ebony. Kiki for Pet Mayor 2018!

Running for actual mayor of Bend

Leonard (or his humans) sent us this letter in regard to his candidacy:

"Thank you for inviting me to take part in your Pet Major campaign. But I see what you're doing. You're trying to create a distraction. By inventing another category, you're perpetuating human control of the city. I'm running in the actual mayoral race because humans have made a mockery of the political system, and it's time for a real change. Humans are not the climax species of politics.

I'm sure you're aware that I am the only mayoral candidate to receive not only local front page coverage, but national and international coverage as well. There are humans among you that know, as the Egyptians knew, that we cats are the ones truly at the helm. You've managed to take control of the political system for 4,500 years. And for the most part, it worked. But now, even at the highest levels you humans are stumbling, you are divided, and you will fall.

And I have no intention of stopping at mayor of Bend. Soon I and other enlightened cats like the late mayor Stubbs will gain their rightful role in the political construct and lead civilization to a brighter place.

Our ears are back and our claws are sharp. You can do this the easy way or the hard way. But you humans will surrender control.

Thank you for your vote and admiration. I look forward to representing you in the future.