Inviting a range of perspectives; bridging a gap between people from different walks of life

Editor's note: Joshua Langlais is a local photographer and the creator of A Community Thread, a project for which he interviews folks on the subject of community, its importance, and how we function as individuals within it.

This is an excerpt from his interview with Dorian Allstot, who describes himself as a seeker of life experiences and someone who aims to liberate himself and those he cares about from poverty and oppression. 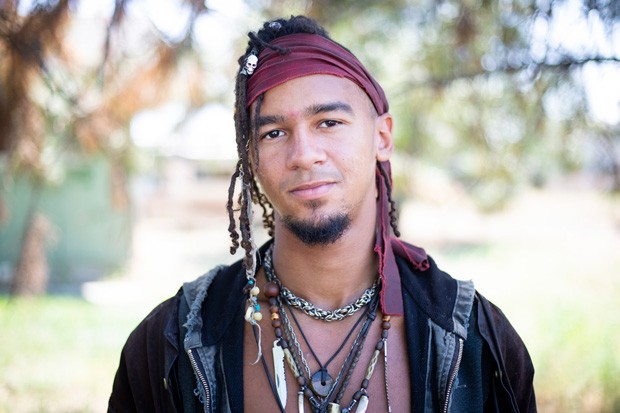 A Community Thread: What concerns you about the state of the world and humanity? And what inspires you or motivates you to do something about it?

Dorian Allstot: What concerns me the most is the lack of understanding and the weird bubbles of ignorance and the lack of willingness to have compassion and understanding for someone outside your own perspective. It's not so much that these things shouldn't happen. It's not so much that all this ignorance and the huge dichotomies between what one person sees to the other and the inability to find compromises. I can understand that. What concerns me the most is our ability to reconcile that before we hit an event horizon.

We're really good at pushing ourselves to damn near annihilation and then learning from that and coming back and then doing the same thing again. But at this point in the world, there is so much destruction going on and so much capacity for destruction just based upon people's lack of understanding. But I'd very much like to see what would happen if we could get to that point, learn from it, and then what we look like after that. What concerns me is the possibility of not getting to see that. We're pretty much in the generation that gets to watch everything get torn apart and live whatever life [we] have left in the remnants of us fizzling out.

I find myself in a lot of different circles and a lot of different places and interacting with people I'd never guess myself to interact with and now interacting with people I feel super at home with. I have the ability to, in my personal life, do little things to bridge that gap to understanding. And there's things that can be brought to light—just these simple conversations with your interactions—that kind of help people broaden their understanding. It's not that those things aren't valid—that you've been mistreated or ostracized or marginalized by certain people—but to take away that projection that you have because of those experiences and still understand that those are people and be able to see them more as people as opposed to this projection.

Through conversing—through allowing people to meet with people they otherwise wouldn't have the chance to meet with, through offering different perspectives I gained—that might cause somebody to be like, "Oh, shit. I never thought that." And that makes them just a little bit more human. It might not totally 180 their perspective, but there's at least some kind of seed—regardless of how much we might clash—of, "You are still a person." In that same kind of sense, "You matter."

ACT: What does our inability or refusal to consider all the different needs and inequalities mean to you?

DA: That's instant terror for a lot of people. Even though we're more globalized than we've ever been at any point in history, there is still a heavy, heavy tribalism mentality that goes on in virtually every level. Communities get split so heavily between different groups, which isn't necessarily a bad thing at all, but it is when it becomes an "In" group versus "Out" group kind of thing. There's such a strong tendency to clique up. It's really crazy strong.

Everyone's so enraptured in their own needs and also not sure what they want, but know they don't have what they want and they're so concerned with trying to fill whatever that is. People would rather go with the familiarity of "This is what I want" even if it's a total lie to them as opposed to not having anything to cling onto at all and be like, "What if I don't know what I want?" or "If it's not this, then what is it?" People just like being, through fear, stuck in their own bubble. There is a stubbornness about it.