Joshua Langlais is a local photographer and the creator of A Community Thread, a project for which he interviews folks on the subject of community, its importance and how we function as individuals within it. This is an excerpt from his interview with Travis Wiggins in October. Travis describes himself as a father, a husband, a nurse and a deep thinker. 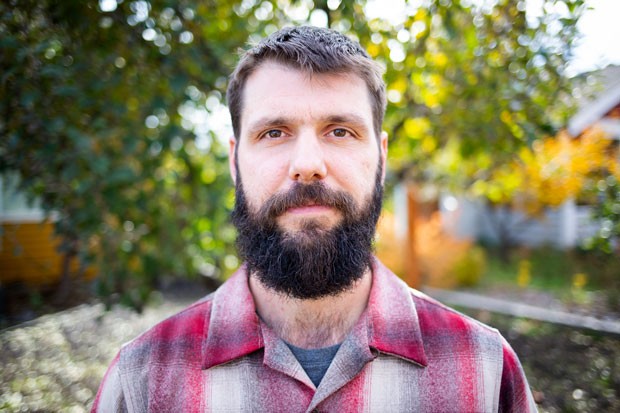 A Community Thread: What concerns you about the state of the world and humanity? What gets under your skin and affects you personally?

Travis Wiggins: I like to think I generally have a pretty positive outlook, but I do feel a certain baseline level of stress and sorrow and mourning about things. One thing I think about a lot is the way that in our society—at least here in North America for someone of my age and of my background and of my privilege, basically—I'm concerned with how many choices we have. And how the world is your oyster is the common adage. And for most of my life I knew that to be true and I kind of thought that was a gift. And I think in many ways maybe it still is, but I think there's another side to that coin that everything is out there for the taking. I feel less obligated to do a lot of things. I don't feel particularly obliged... I don't feel a duty to certain things due to this overwhelming sea of choice that I have in front of me. And I think that's common among people of my age and my background and my privilege, being a younger, white, educated male. So, sometimes it seems like what that sea of choices turns into is it manifests in choices that maybe aren't serving you or the world. It can turn into a life of excess or addiction or rampant consumerism or action unbound to any spirituality or any tradition or any lineage.

So, while I don't feel particularly wrecked by any of those things, I feel like it's affecting me nonetheless because sometimes it just feels like I'm humming along in this easily accessible, low-hanging-fruit, opportunistic fashion. Like, this is a super-easy groove. I can be rather passive. No one's really attacking me emotionally or because of my education or color or religion or sex or sexual preferences or anything. So, I'm just on this steady path. And the choices that I'm left with are often times rather easy and fun ones. Do I want to take up skiing or windsurfing this year? They're things that don't carry a lot of weight or consequence and they don't really affect too many people beyond myself.

And I feel like some people, just the nature of who they are, get forced into a more consequential way of being. They have to engage with serious stuff on the daily because of how they were born. I'm lucky, in a sense, that that's not me, but then it just sets me adrift on this easy path—this life of leisure. In a way, I'm lucky for it and I'm grateful. But I feel like now as I'm entering these middle years of my life, I'm interested in finding something with more purpose. Purpose hasn't found me and wasn't handed to me. That makes it sound like I'm a victim of my own reality, but I'm trying to find a way to be more essential.

I do feel that many people are experiencing that, and I think that that leads to a lot of what we see around us today. It manifests differently in different people. It might be some of that lostness or that lack of connection or that lack of accountability or that lack of tradition or respect—any number of things—that lack of something that people are having that might be leading to school shootings and toxic commercialism and toxic sexism and all sorts of stuff like that. That's the environment that I grew up in. Not calling foul on any of the people that raised me because that's the environment that was around and they were coming into, as well. That is the relatively sad side of our current situation.

That's our society right now and there's a lot of opportunity there — in the freedom and in the choices. And, luckily, there's a lot of really beautiful people with open hearts trying really hard to point their energy and their intention in ways that are just. But there's also a lot of people that just don't think about it. And that's the general background noise, I think. That's the sprawl and the trash everywhere. And then there's the malignant side of it. This freedom, this choice, all this — it can go to a really extreme degree, as well.

You can read or listen to the entire interview at acommunitythread.com.