I went to the Last Blockbuster to choose something weird. This is what I found.

In celebration of the worldwide DVD/Blu/VOD release of "The Last Blockbuster" this week (written, directed and produced by Bendites Taylor Morden and Zeke Kamm, and with an appearance by yours truly), I decided to make it a Blockbuster night. Nothing streaming was tickling my fancy and I'm literally two blocks away from the last Blockbuster in the known universe, so I put on my mask and headed to the store to try to find something weird.

Did you ever do that as a kid? Pick the movie you wanted to watch just based on how cool the box art is? Well, that's what I was after: a bonkers cover that promised me 90 minutes of insanity...no trailer, no buffering, no expectations. In the new releases, I found something so strange and wonderful that my 12-year-old self was finally able to die happy. The cover was bright psychedelic yellow and looked like someone's face was melting, which was perfect because I was looking for a movie that would actively melt my face. 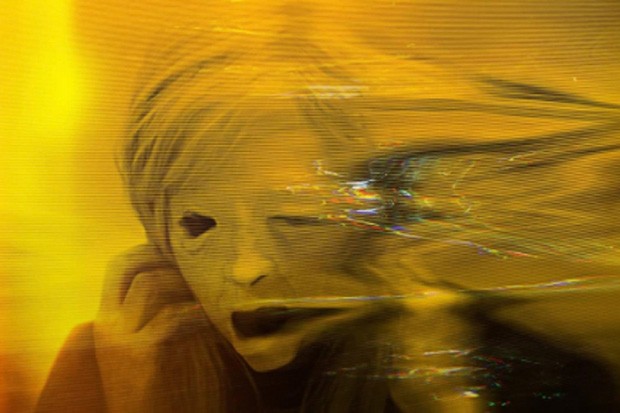 The movie is called "Possessor" and it's written and directed by David Cronenberg's son Brandon, who was responsible for 2012's super-disturbing high concept thriller "Antiviral," which follows a guy who sells designer pathogens curated from diseased celebrities. "Possessor" is a similarly high-concept sci-fi mind-f*ck that taps into our fear of corporate surveillance while also telling an intimate story of losing yourself to your work. The always incredible Andrea Riseborough (Mandy from "Mandy") plays Vos, a contract killer for a mega-corporation whose consciousness is implanted in the body of another person who through she then carries out the assassination.

Whenever she's unplugged from her latest victim, she tries reconnecting with her estranged husband and son, retraining her mind how to care about playing with her kid or how to engage in small talk at dinner parties. Every time Vos regains her consciousness and re-inhabits her body, she not only leaves a piece of herself behind in the body of her victims, but gains some of their feelings, thoughts and memories.

"Possessor" is a lo-fi, cyberpunk technoir thriller filled to the brim with imagination. As much as I enjoyed "Tenet," "Possessor" is filled with the big ideas, themes and concepts I wanted out of that movie, but with one-tenth the budget. Cronenberg takes the body horror paranoia of some of his father's films like "The Fly" and "Videodrome," but then modernizes those fears into a movie that plays like a rot-infused fever dream from the mind of our grandchildren.

I'm sure I would have eventually discovered this movie when it shows up on some streaming service or another next year, but finding it on the shelves while socially distancing my way around my local video store felt like I was rediscovering a part of history I had thought long buried. It was something so simple: Hey, that box has cool art! Grab it, read the back and take a chance on it. But doing it still almost feels revolutionary.

"Possessor" is violent, intense and deeply strange, guaranteed not to appeal to many of you reading this. I'm not even necessarily recommending you watch it (although people into experimental cinema will have a religious experience), but instead I'm just here to once again sing the praises of physical media and the tactile sensations of investing something more than a barely noticed automatic withdrawal in order to engage with the art we consume.

Investing the tiniest bit of effort into procuring "Possessor" made my relationship to the film different and more meaningful than if I'd just clicked play while fumbling through Netflix. I paid more attention and gave more of myself to the film as if it was homework I dared not fail, which in turn made me feel connected back into the world like I haven't felt since somewhere around March. Rejoining the human race...one movie at a time.

Possessor
Directed by Brandon Cronenberg
Grade: A-
Now available at Blockbuster or VOD