A Cup Bridges Civilians and Veterans

Sharing tea with Iraqis and Afghans was the highlight of Michael Montgomery's 10-year military career. "Afghan time goes slower," Montgomery explains. "If you met an elder it would start with tea and take hours. You would talk about a lot of stuff before you got to business." This process was about finding common ground, and is the inspiration behind the launch of Coalition Tea. 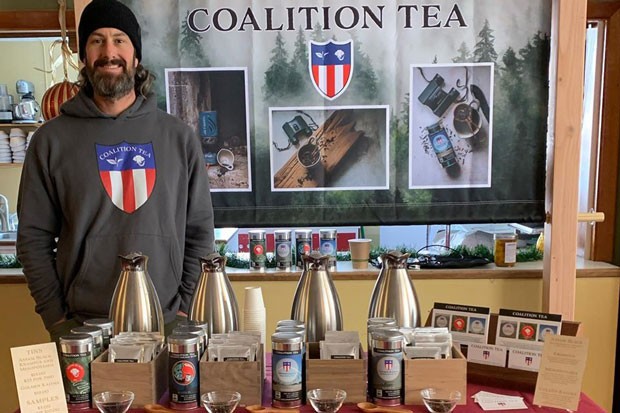 Tea is one of the most universal beverages around the world, but it isn't as popular in the U.S., where coffee reigns supreme. Montgomery, a Sunriver native, was a heavy coffee drinker until he had to make some diet and lifestyle changes. To replace his beloved coffee, he turned to the next best caffeinated beverage: tea.

Having no experience in the tea business, Montgomery and his wife, Jen, needed help. They knew the Coalition Tea blends would be inspired by the tea he drank while deployed in Northern Iraq and Afghanistan—but it wasn't until connecting with local Cindi Neiswonger of Inspired Leaf Tea that the vision became a reality. Neiswonger knew how to source and blend. Another helper was an interpreter from Western Afghanistan, who Montgomery worked with while deployed and who happens to live in Bend. He helped with research and is behind the Kashmiri influence in the Golden Kahwa blend of lightly spiced green tea that includes cinnamon, saffron, ginger and peppercorn. I could see why it's called golden—but when I mixed cream and sugar into my hot cup of Golden Kahwa and stirred, the hue became lemon yellow. The Golden Kahwa flavor is bold but subtle; the flavors of the spices continued to dance on my tongue well after a sip. Adding lots of sugar and some dairy is how Afghans drink their tea. Montgomery included, "they drink their tea super strong, with more tea to water."

Each package of Coalition Tea has a square sticker with an illustration of an elephant and the words, "Certified Elephant Friendly." I asked Montgomery why that was important. "Tea farms are in the migratory paths of elephants," Montgomery explained. "Some tea plantations use large electrified fencing and ditches or moats that can kill the elephants. Asian elephants are endangered. It's a huge human-elephant conflict because everyone is just trying to survive, but there are people trying to balance this out." One of those conservation-minded tea farmers is Tenzing Bodosa in Assam, India.

NPR fans may remember reporter Julie McCarthy interviewing Bodosa last year. Bodosa discussed his move to a chemical-free farm because pesticides made him feel nauseated with headaches. The clothes he wore while spraying pesticides killed the fish in the water where he washed his clothes. He also talked about the wild Asian elephants that roam free on his organic farm, a decision that puts his tea pickers at risk of being injured or killed by the giant mammals.

Montgomery hopes that the simple act of sharing a cup of tea can help bridge the veteran-civilian divide. The term "coalition" means an alliance for combined action; Montgomery describes it as "coming together, a unified group or force of people." The shield logo for the company is a nod to Montgomery's grandfather's service during World War II in the China-Burma-India Theater. The original insignia had a sun and star, but Montgomery replaced it with a tea leaf and elephant for the Coalition Tea logo. Since starting Coalition Tea, members of the Special Forces community have reached out to Montgomery to let them know they're tea drinkers. He says this "helped him connect with other male tea drinkers," since it's not as common for men to drink tea in the U.S.