The negative issues connected to lead used in sport hunting go back to the Year One, and it's taken over 100 years to really understand what a horrifying impact that stuff has on wildlife resource as well as the world around us.

A photo I once took of a lead-filled duck gizzard is just one example of how lead gets into the life and times of waterfowl. If you go out to the pond today where I found that dead mallard in the mid 1960s on Sauvie Island, and scrape the bottom, you can still find lead from those long ago days. 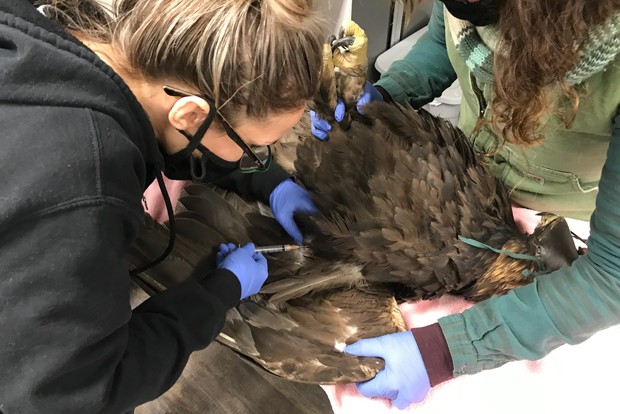 If you're a sportsman who shoots deer and elk for your supper you really should x-ray the liver, steaks and backstrap of the animal you shot before you cook and consume it. Thanks to today's technology, it's now well known that when a lead projectile strikes bone and marrow it's blasted apart and ends up in deer and elk in places you never dreamed of finding it.

Some big game hunters let loose with two to four rounds bringing down their quarry, and even if one round does the job, and the others end up somewhere else in the animal (if the hunter's a good shot) the quarry's going down with lead fragments all through it.

Most sportsman "clean" their quarry on site, even to skinning the animal. That pile of guts left out there on the ground becomes food for wild things that get by eating carrion, among them eagles.

That eagle—bald or golden—then becomes the unlucky victim of the lead shot blasted into the animal and is still there in fragments. And unfortunately, it's not just the eagles that suffer, but the alert cleanup crew who first discovered the gut pile—crows, jays, magpies and/or turkey vultures, and small mammals—that also suffer.

That's the reason lead is now banned from big game ammunition used in California. The state and feds made sports-shooting history when they passed the no-lead law in 1991. A joint statement from several leading researchers in lead toxicity got the ball rolling and thankfully it all led to a new law.

At least three times a year I’d find one of those poor victims and I’d take it to a local veterinarian in the Bend area. tweet this

It only takes a few ounces of lead shot to go into an eagle's digestive system and be carried by the blood into the liver or kidneys, then all hell breaks loose, causing toxic damage along the way.

The first thing that goes haywire is the circulatory system of the raptor's blood, which quickly spreads to the animal's muscles and digestive juices. Paralysis begins to set it and the bird can no longer fly. Then it can no longer walk. Then it lays down and can no longer hold its head up or control the muscles in its legs.

The eagle's head droops to the ground, blood starts to seep from eyes and nostrils and its feet curl up into a tight ball. Then it just lays there until it dies...or...some Good Samaritan comes upon the poor beast, thinks it's strange when it doesn't fly away, gathers it up and takes it to a local vet. Or a loose dog gets there first and you know what happens...

At least three times a year I'd find one of those poor victims and I'd take it to a local veterinarian in the Bend area. One of my favorites was Broken Top Veterinarian Clinic located between Sisters and Bend on Highway 20.

Dr. Little Lidblad was operating the business back in the 1990s and into the 2000s, and the look on her face when I walked into her lab still brings tears to my eyes.

She asked me to place the dying bird on her lab table where she slowly walked around it. She'd then use one of her medical tools to gently poke the neck, wings, tail, legs and feet. Then she'd look deep into the bird's eyes and mouth. After that she'd measure out the amount of chelation to be injected in it, and the long process of getting the lead out would begin.

The 10-year-old Golden eagle recently brought to Think Wild Hospital and Conservation Center in Bend was just about dead from lead poisoning, but the fast action of the medical crew with chelation therapy started the bird along the route to quickly save its life.

After two weeks of treatment, Think Wild medical technicians tested the blood of the eagle frequently and found it approaching releasable condition. This was a heavy, hands-on routine, with lab technicians feeding the eagle lean, wild meat to help restore its strength and vitality.

One of the key reasons the project started by the U.S. Fish and Wildlife Service to save the nearly extinct California condor has been handicapped is lead in the hunting environment. Biologists and zoos raising condors in captivity were very reluctant to approve releasing any captive-raised condors in Oregon and California because of the lead issue. Condors released in the Grand Canyon area were somewhat safe from hunter's lead, but as soon as the birds began to enter their historic breeding ground in California they began dying of ingested lead found in gut piles and dead animals.

The irrefutable knowledge we have now accumulated regarding deaths caused in non-target wildlife consuming lead-saturated carcasses leaves no question that now is the time for the United States of America to ban all lead in all recreation and wildlife management activities.