Steve Martin and the Steep Canyon Rangers exist as two separate entities in music, but also merge into one touring force 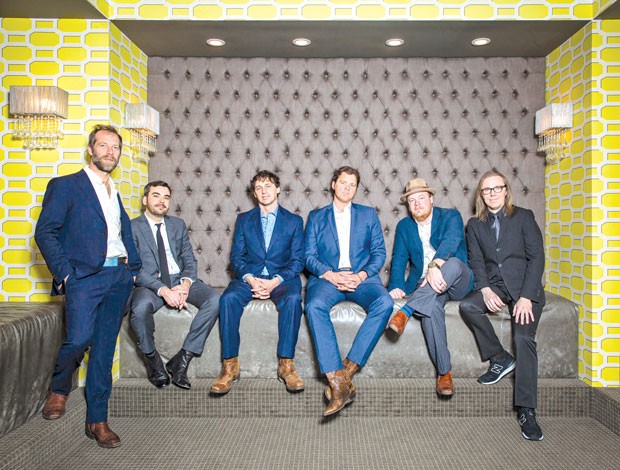 If bluegrass music has an equivalent to the relationship Bob Dylan enjoyed with The Band, it might be in the partnership that has developed between Steve Martin and the Steep Canyon Rangers.

Dylan famously brought the future members of The Band—originally known as The Hawks—to be his backing band on his 1965 and 1966 tours, during which he plugged in and went electric with some of his show, a move that sparked loud objections from some fans of his solo acoustic folk music. In 1967, Dylan and The Band began an extended writing and recording session that produced a legendary set of music, eventually emerging in 1975 on "The Basement Tapes" double album and a 2014 6-CD box set documenting more than 100 songs committed to tape during that time. Dylan and the Band then reunited in 1974 for an extensive tour that produced the live album, "Before the Flood."

The Steep Canyon Rangers had been a group for some nine years and had released five albums when they met Martin and were selected by the comedian/banjo player to be his backing band on a tour to promote Martin's bluegrass album, the 2009 release, "The Crow: New Songs for the 5-String Banjo."

A decade later, the collaboration is still going strong, with the Steep Canyon Rangers having done several tours with Martin and played on two more Martin albums – the latest of which is last year's "The Long-Awaited Album." Several members of the Rangers also played on "Love Has Come for You," the album Martin and Edie Brickell released in 2013. Looking back, mandolin player Mike Guggino said the timing to start working with Martin was ideal for his group. The Steep Canyon Rangers – which also includes guitarist/singer Woody Platt, banjo player/singer Graham Sharp, fiddle player Nicky Sanders, drummer Mike Ashworth and new bassist Barrett Smith (replacing Charles Humphrey III)—were established enough in the bluegrass world to be seen as a viable band on their own, but still in a place where an association with a big name like Martin would help them grow their audience, and not deflect too much attention away from their own careers.

"I think if we had met him years later, it might not have been a good idea," Guggino said. "But I think we met him just at the right time when we were popular enough and good enough to be able to do the gig and bring something to the table, but not so popular and whatever that it would have been a bad choice to not do our stuff. And it really did help boost our career, for sure. It put us in front of a larger audience. He got us on TV and big-time radio stations and really got our name out there. We definitely noticed a boost because of that, for sure."

As the years have gone on and they've done more projects with Martin, the partnership has only deepened. Guggino said both the Rangers and Martin have brought talents to the table, benefiting both parties artistically. On "The Long-Awaited Album," Sharp and Humphrey III each have co-writing credits on a song, and the entire band was heavily involved in arranging the songs.

"I think the Rangers had as much to do with the arrangements, if not more, than Steve on every song," Guggino said. "And that's what's so cool. He (Martin) trusts us. He trusts our ears and our tastes and we work together very well, and we come up with arrangements for these songs. It's a great collaboration that way. I think our style and our aesthetic is aligned even more than it was when we started. So it's really like a band now."

"I think it's really impactful for the audience to all of a sudden see Steve up there playing the banjo, and not just playing the banjo, he's tearing it up. And then we play a couple of tunes with him, and with Martin Short. Then they leave the stage and let us do a song just by ourselves." —Mike Guggino tweet this

Of course, the Steep Canyon Rangers also continue to make albums and do their own shows between touring and recording commitments with Martin. The group recently released its 10th studio album, "Out in the Open," and is spending this summer playing a mix of their own headlining dates and shows in which they serve as backing band for Martin and fellow comedian/actor/singer Martin Short, who together bring a mix of comedy and music to the stage in these shows. The group joins Martin and Short on stage at the Les Schwab Amphitheater July 6.

For "Out in the Open," the group worked with a noted producer who isn't from the bluegrass world and has worked with a stylistically diverse range of music acts: Joe Henry. Going into the recording, Henry proposed a recording approach that is rarely used these days. He wanted the Steep Canyon Rangers to record completely live—including the vocals—with no overdubbing. Guggino said the band knew that could be a challenge.

"You've got to get every solo, every little backup lick, every harmony vocal, and you all have to do it at the same time, and if somebody messes up, the whole take is gone," he explained.

It turned out to be an effective way to record the songs.

"You know, it wasn't as hard as we thought it was going to be, and the reason is we play together all the time," Guggino said. "We're such a live band, a touring band, we're always touring. We tour all year round...We know each other so well and our tendencies and how we all think it's going to feel, how we kind of push and pull together and it works. It makes sense. We even stood like we do on the stage. That's how we stood around the microphones."

The idea behind recording live, Guggino said, was to capture the fire, energy and emotion the Steep Canyon Rangers bring to their concerts. And he thinks "Out in the Open" is a very authentic representation of the group as a result.

What also helps "Out in the Open" is that the band's songwriting is strong throughout the dozen songs. The album continues the Steep Canyon Rangers' move toward a broader acoustic sound that, while rooted in bluegrass, draws from other genres. Highly melodic tunes such as the easy-going "Farmers And Pharaohs" and "Roadside Anthems" are as much pop and Americana as any other genre. The title song, a deliberately paced, harmonica-spiced track, leans old-time country, while the lovely ballads, "Going Midwest" and "Best of Me" have a timeless country sound. And even songs that have a good bit of bluegrass ("Let Me Out of This Town" and "Love Harder") have richer melodies than one might expect in that genre. Guggino said the band is so pleased with "Out in the Open" that they're playing the entire album during their headlining shows.

"This is the first album that I think we've ever released where we play every single song from the record in the show, which is pretty cool," Guggino said. "I think that has a lot to do with the way we recorded the record."

For the shows with Martin and Short, though, the Steep Canyon Rangers will have a somewhat limited role.

"Our role in that show is not significant as far as the time we're on stage. We're only on stage not even a quarter or third of the time. It's a comedy show with those two guys doing their thing," Guggino said. "But what we do is really impactful. I think it's really impactful for the audience to all of a sudden see Steve up there playing the banjo, and not just playing the banjo, he's tearing it up. And then we play a couple of tunes with him, and with Martin Short. Then they leave the stage and let us do a song just by ourselves.

"They give us the chance to showcase our stuff on a pretty hot little number, and that usually gets the crowd to its feet," he said. "And Marty and Steve like to joke that it's the only standing ovation that happens during the whole show, and they're not on stage."