A Different Kind of Classroom

Outdoor School is on for Central Oregon's fifth and sixth graders 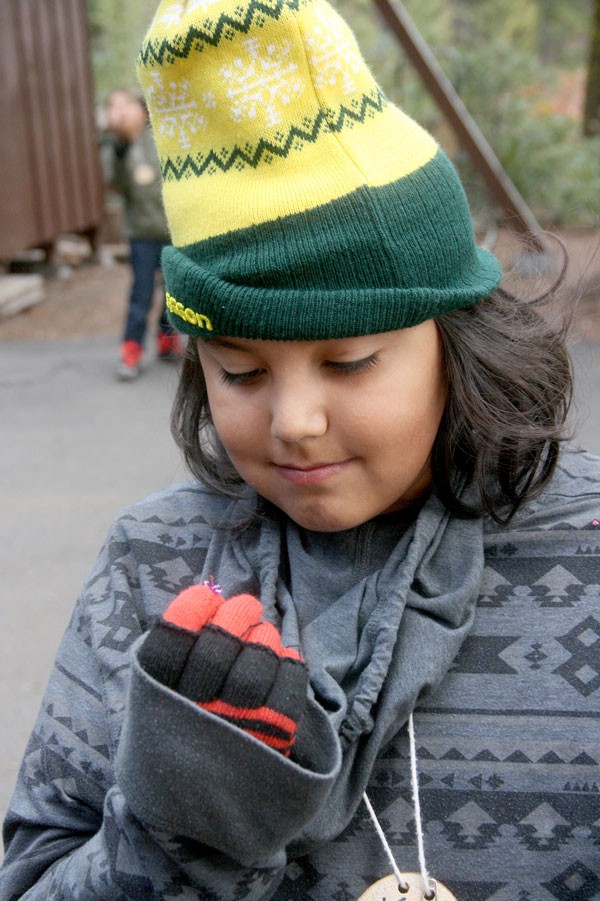 ack in 1966, when Multnomah County began a five-day Outdoor School program for all sixth graders in their system, Betty Gray of Portland—wife of John Gray, who got Sunriver and several other Oregon-based projects going—thought her life-long dream of kids learning in the forest had at last come true.

She left it with her family when she went out among the stars in 2003. The Gray Family Foundation, whose slogan is, "Outdoor School For Everyone," through the efforts and assistance of the Oregon Community Foundation, has kept Betty's dream alive.

Last November, voters approved Measure 99, designating funding for Outdoor School programming for school districts and education service districts (ESDs) to serve fifth or sixth grade students in Oregon. The 2015 Legislature had already charged Oregon State University Extension with administering the statewide program when funding became available. In July 2017, the legislature approved $24 million for the program's first two years, and right at the top of the list of financial institutions dedicated to helping Outdoor School happen in Oregon is the Gray Family Foundation.

Long before Outdoor School became a legislative issue, the Gray Family Foundation was funding outdoor programs within the Bend-La Pine School district, helping with expenses for outdoor studies in the La Pine area.

Several years ago, Charlie Anderson of Bend bought Old Camp Tamarack, a horse camp from the '30s located near Suttle Lake. With considerable planning, enthusiasm and money, he set about remodeling the buildings to accommodate Outdoor School.

When asked about the current state budget, Anderson was so happy he almost shouted: "It's been a process with a number of people throughout the state working to secure state funding for EVERY fifth or sixth grade student in Oregon to attend Outdoor School, and how cool that starting this year there are funds in place to start doing just that!"

OSU Extension hired science teacher, Kris Elliott, who has a Ph.D in education, to be the administrator of Outdoor School. The new program provides at least three consecutive days of outdoor education to Oregon's fifth or sixth graders as part of their school experience. It may run as long as six days with overnight stays, but for now the Camp Tamarack program is for only three.

"Our task now is to support, to the maximum extent possible, all school districts and Education Service Districts that would like to provide Outdoor School programs for the 2017-18 school year," Elliott stated.

"School districts and ESDs are free to design their own outdoor curriculum," Elliott said, "as long as the instruction meets the educational goals set forth in the 2015 legislation.

"We know some districts may not have a lot of experience in developing outdoor education," he said. "During the first year, we'll try to connect these districts with others that have more-established programs."

Last week, Warm Springs fifth graders were at Camp Tamarack from Monday to Wednesday. The day began with breakfast and the usual camp pep talks—which brings about a positive attitude for camping and learning.

One tiny object has helped to foster the right attitude: the coveted "Purple Bean Award." Organizers offer a pin with three tiny purple beads arranged in a triangle to the student who demonstrates good camping habits and fosters a strong attempt to make things work better at camp—especially with his/her learning partners.

Another distinctive asset to the present Outdoor School programs are the journals used by students and instructors. The student's journal has several pages for notes, instructions for behavior at camp, and on the very first page, a drawing of a raptor with this statement beneath it: "This is an outdoor school where people, plants, and animals live together and learn from each other. This is your book to help you learn about the outdoors, remember your unique experience here, and share what you've learned with your friends and family back home."

The Student Leader Journal is filled with positive thoughts and suggestions on how that high school-age student leader can not only make his or her stay at Outdoor School a positive experience, but how to help the students have a wonderful time. The first page has the same statement as the student journal, and on the second page is the statement:

"As a Student Leader I will Learn about ecology; Become a leader and Our Guiding Principles:

Most of the forest surrounding Tamarack was burned by the B&B Complex Fire of 2003. The conflagration consumed mostly Ponderosa pine, Lodgepole pine, Douglas fir, White fir and Tamarack near Sisters. In the 34+ days the fire roared through the countryside, it raged into the Warm Springs Indian Reservation. Last week, the fifth-grade students from Warm Springs observed a blackened tree, used to teach them about the nature of fire.

As a group of 10 students, divided into partners, began their trek into the wildfire zone, they stopped often to discuss various aspects of fire and the recovering ecosystem. "I notice..." one partner would say to the other, and then describe a particular part of the burned forest that caught his or her attention.

Instructors guided the students into discussing fire, forest, water, geology, wildlife and the methods that were used to bring the fire into eventual control. At one point, one of the high school instructors asked why, if fire had destroyed so much of the surrounding forest, the buildings at Camp Tamarack were not burned. A discussion went on for almost an hour regarding the firefighting methods that saved the camp, the firefighters' tools and procedures, money spent on fighting the fire and the impact not only on the forest itself, but on the native wildlife and ecosystem. As the students continued on through burned and unburned parts of the forest, instructors injected the ideas of scientific discovery, using it to go deeper into aspects of biology and the complexities of the ecosystem impacted by fire.

The desire to work with fifth and sixth-grade students is the key for the permanent staff at Camp Tamarack, especially for instructors such as Ariel Clark, known as "Orion" to her students. Everyone at Outdoor School has a "camp name" that helps keep the students on track with the nature of the place they are studying. Clark hails from Boston and holds a bachelor's in Sociology, is a trained EMT and has been a member of the camp staff for over four years.

"I just love working with students in this outdoor setting," Clark said. Her boss, and director of Tamarack was listening—and nodding his head up and down, smiling—as she talked about her work at the camp.

Students and their teachers will be coming to Camp Tamarack from schools throughout Central Oregon. Thanks to the training and dedication of the volunteers and staff of Outdoor School, the students will return to their respective schools and homes knowing more about the nature of Central Oregon—their home in the Pacific Northwest.