A Different Kind of Extracurricular ▶ [with video] | The Source Weekly - Bend, Oregon

A Different Kind of Extracurricular ▶ [with video]

High school students have many extracurricular activities to choose from in Central Oregon. There are traditional sports such as football and volleyball—but here's one that might surprise you: trap shooting.

Mountain View High School hosts a team that competes in the Oregon State High School Clay Target League. The MVHS team includes students in grades 6 through 12 from various schools in the Bend area. 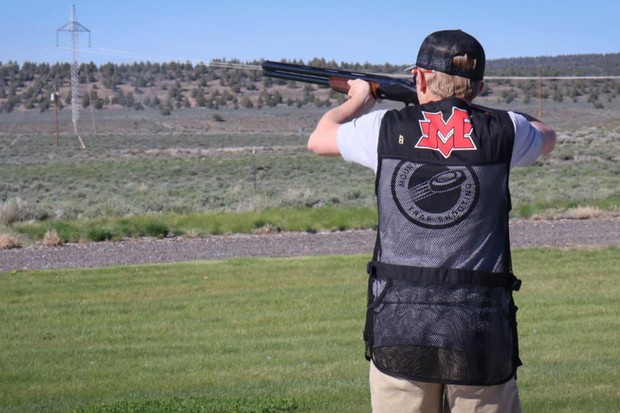 For those unfamiliar with trap shooting, the sport involves a participant using a shotgun to shoot at clay disks which are thrown in the air from a mechanical arm. Local rod and gun clubs have ranges designed to safely shoot these disks which are also known as "clay pigeons" or "birds."

"The club started in 2018, and this fall we registered 49 students for the team," said MVHS head coach Kim Hurt. "Of those, 17 are new to the club." With both JV and varsity members, the team uses the fall season mostly for practice, although the athletes may record their shooting scores with the Oregon High School Clay Target League and submit them online. "I would love to take every student that asks to join our club but we cut off registration at 50 to make it manageable."

Last year, the club found success even during COVID. "Our club doubled in size last year due to COVID because it was one of the few sports still operating, and it's pretty COVID-friendly just by the nature of the sport," said Hurt. Students are spread out while on the range and do not share any equipment.

To participate in the league, which is a member of the USA High School Clay Target League, students must meet school eligibility requirements and have a Student Athlete Firearm Education certification or state-approved hunter education safety certificate. "Safety is number one on the priorities list," said Hurt, who added that the league has never had an accident. While on the range, a range safety officer and scorekeeper manage the activity for safety.

WATCH: Team members and coaches talk about the sport:


The club is co-ed and provides for adaptive students to participate. "We have eight girls on our team this year, more than we've ever had," added Hurt. During the spring competitive season, students compete as either JV or varsity, and those that average a score of 20 out of 25 can letter in the sport.

The team practices and competes at the Redmond Rod and Gun Club, uploading scores online to ORSHSCTL. The only travel competition is the state tournament held in Hillsboro each spring; last year MVHS placed third.

Like most high school sports, it takes a clan to raise a team. "Nosler, Oregon Hunters Association (corrected from the print edition, which read "Oregon Health Authority") Rocky Mountain Elk Foundation, and the Deschutes County Sheriff's Office have all been great to work with and very supportive of the team," said Hurt. As a nonprofit, the team relies upon sponsors, parents, businesses and fundraisers to pay for practice time, jerseys, and some equipment. 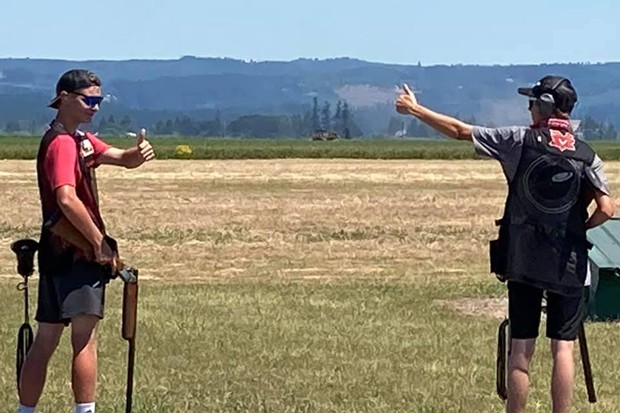 "Every time I have a conversation with someone at school who isn't in the club about the sport, they're surprised our high school sponsors it," said Varcoe.

Besides his coach, Varcoe also credits Gary Fogelson, an instructor at the Redmond Rod and Gun Club, for his improved shooting. "He's helped me out a lot with things like foot placement, how to move your body when shooting, and to follow the path of the clay, even if you shoot and miss," added Varcoe.

"The kids are very responsive," said Fogelson, who has trained Olympic trap shooters and is a member of the Pacific International Trap Association's Hall of Fame, among other accolades. "They have excellent reflexes, good eyes, and we've got some kids that have excelled beyond my expectations." Fogelson has worked with students on teams from Madras and Mountain View, and is always impressed with their courtesy and respectful nature while helping them with the mental aspects of shooting.

Beyond high school, some students aim high and attend colleges that have trap teams where the students can continue with competitive shooting. Last year's Tokyo Olympics also highlighted the sport where the USA Olympic Shooting Team won a total of four medals in skeet and trap competitions.

Culver, Madras, and most recently, Crook County will also have teams competing in the spring season. And as Fogelson points out, even though the students may not continue to compete after high school, the activity teaches them about life and about themselves. Worthy goals from a unique sport.

Related Rites of Passage Gone Awry: What it's like being a senior amidst the pandemic