A Different Kind of Parade

Redmond will keep the show moving this 4th of July with festive porches, shoebox floats and the community's creativity

Gatherings and events for this year's Fourth of July will be much different than they have been in years past. Both of the popular Old Fashioned Festivals in Redmond and Bend have been canceled, and get-togethers in backyards will be smaller than usual. However, the Redmond Chamber of Commerce aims to keep the spirit of Independence Day alive with a couple innovative ideas—the first being a Patriotic Porch Parade. This gives people the opportunity to really get festive right in their own homes. The theme is "Flag City, USA," but members of the Redmond community can decorate their front porches in any way they see fit. This brings some festive stylings to neighborhoods, and the Chamber of Commerce has released a map of all the locations for people to drive by or walk to so they can experience the porches in all their glory. It's kind of like those magical Christmas light drive-thru villages. 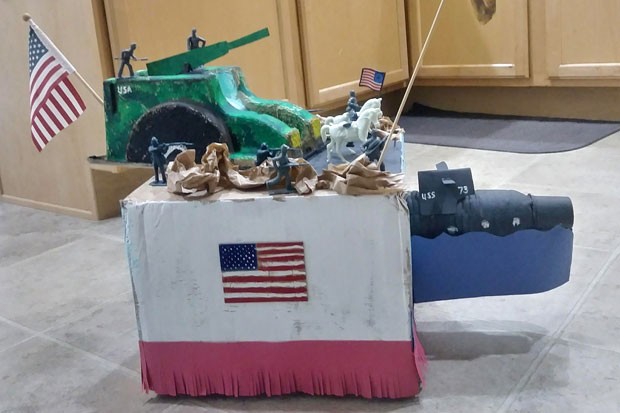 The second opportunity is the Chamber's Mini Parade. The Mini Parade utilizes shoebox floats, similar to a diorama you might have made during school. People were free to create a float for whatever they want, utilizing every corner of their imagination. The theme for this was also "Flag City, USA." Participants who entered took photos and videos of their projects to be sent to The Chamber, which will be used in a livestream on July 4 at 10am.

"Since schools had closed early, parks were closed, and pretty much any outdoor activity had been heavily limited, we wanted to give locals an outlet for their creativity while maintaining the bonds that we have as a community," Redmond Chamber Events Director Kara Roach said. "The shoebox floats presented many families the opportunity to create something together, giving the kiddos something to be proud of and share with the world. The Porch Parade also opens the opportunity for individuals to display messages of love and encouragement to others and share their community pride."

Participants' creative efforts won't go unnoticed, either. There will be five categories for the Mini Parade shoebox floats: Children, Individual, Commercial, Organization and Anima, with first, second and third place ribbons awarded for each category. It's free to register for both parades. "The shoebox floats presented many families the opportunity to create something together, giving the kiddos something to be proud of and share with the world. The Porch Parade also opens the opportunity for individuals to display messages of love and encouragement to others and share their community pride," Roach told the Source.

Another element of parades that will will be alive this year: marching bands. People were invited to submit a video of a family marching band or a baton-twirling routine. Roach said they have around 100 submissions overall—pretty standard for Redmond's annual parades.

"We live in such a tight-knit community where businesses support each other and neighbors lend a helping hand. The Redmond Chamber has been putting on the holiday parades for several decades now, along with other free community events, with the sole purpose of honoring those that live and work in Redmond, those who make this such a wonderful place to be," added Roach. "We felt like we owe it to our community members to continue to support them any way we can to bring even a small semblance of normalcy where we celebrate as a community."