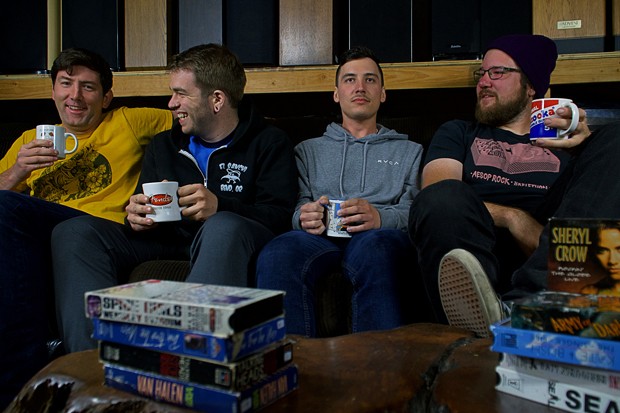 When I met with the (very tall) David von Schlegell for an interview at Spoken Moto (my favorite part about writing about local bands) he handed me a burned copy of the new Cosmonautical album, enclosed in an old Garth Brooks CD case. After parting ways, I immediately listened to the whole thing in my truck. I could not have been more stoked about the sound and lyrical content from start to finish. The local band, which von Schlegell, an Oregon native, started in 2010 while living in New Hampshire, releases its first full-length album, "Talking to People You Don't Know," Friday at Volcanic Theatre Pub.

In 2014, von Schlegell moved to Bend and began bringing together musicians to round out the Cosmonautical lineup. The band includes von Schlegell on vocals and guitar, Paterson Colson on drums, Mackenzie Hatfield on bass and Jaren Brown on guitar. Cosmonautical plays guitar-driven rock with elements of pop, post-punk and blues.

"I'm trying to get in the practice of writing for writing's sake, committing myself to writing and not worrying about whether or not I'm going to use it," von Schlegell says. "Kind of develop the craft. If you're waiting for divine inspiration, it might never come, but every now and then there are a few songs like 'Call Off the Dogs' that I wrote instantly. I sat down and wrote it in one sitting because it was about something that was happening in my life at the time. I think it's timely because it has to do with paranoia and technology."

The album, which the band recorded with Dayne Wood at The Firing Room studio in Bend, touches on the feelings of being preyed upon by society, loneliness, substance abuse, love, codependency, equal rights, classism and spiritual crisis.

"I usually bring the skeletal structure of the song and the guys come together to help flush it out," von Schlegell says. "We try to allow for as much creative freedom as possible. I think the guys are sensitive to these songs that mean so much to me. Everyone writes their own parts, we talk about what's working and what's not working. We also try to leave some room for spontaneity. The element of danger, that things might go wrong, that keeps us entertained and happy to keep going out and going after it night after night."

The album reflects the timeliness of the chaotic landscape that we're living in while still remaining eclectic in the sound and themes, von Schlegell says. Upon listening to the album or seeing the band live, he hopes people begin to see them as not just a local band.

"We continue to do it and we're content to make music in hopes that music becomes as supported and celebrated as anything else that's going on in Central Oregon," von Schlegell says. "We're inspired by what our friends' bands are doing, we're inspired by artists in the community. We're inspired by the hip-hop community quite a bit."

As Cosmonautical approaches five years of being a band in Central Oregon, building solid relationships with venues and other bands, the next logical step is going on the road, visiting towns they've never played in before. Transportation is a factor that's held them back from touring in the past, but the band members hope to get reliable transportation for touring with profits from their upcoming album release show.