Bevel Brewing has been on craft enthusiasts' watch lists for quite some time now, and the wait is finally over!

Bevel is now open, with a grand opening planned for Saturday, April 6. The atmosphere is industrial, and the outdoor areas are vast, with potential for plenty more food trucks than the space has now. I stopped in and tried a taster tray and was thoroughly impressed. The beer is sophisticated and complex, and the hops are the star in their beer. If you're of those people who professes you "don't like IPAs," it's OK—you should still try the beer. It's all so wonderfully balanced. Of the five beers I tried, the one that stood out as phenomenal was the Black Ace. 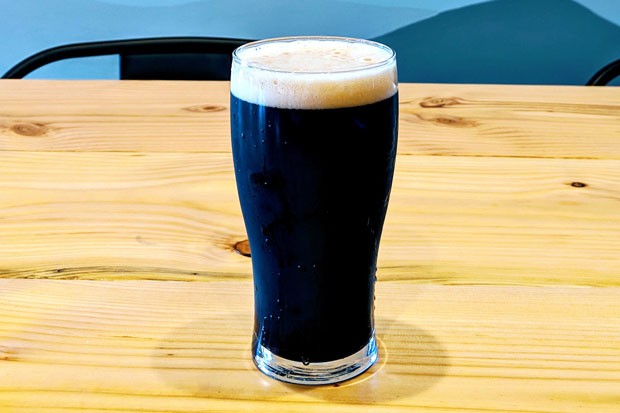 Black Ace is a CDA, or Cascadian Dark Ale, synonymous with Black IPA. This style of beer is dark and roasty. I've had both highly hopped and hardly hopped versions of this beer, but either way, they should always be roast-forward. When you drink this style, you're hit with tons of roasted malts and grains.

Black Ace is no exception, but what makes it stand apart from other CDAs is the finish. Many CDAs finish with a strong bitterness and slight astringency—flavors often occurring by over-steeping during the brewing process. Black Ace is medium-bodied and has a creamy mouthfeel. It's not sweet and tastes of roasted malts and a touch of chocolate. The hops provide a touch of bitterness to balance out the silky mouthfeel. Its finish is just as pleasant as its start. Black Ace has zero astringency, and the pleasant bitterness flows throughout the taste, reminding you that there are in fact hops in the brew. Each time I took a drink, I was blown away by its complexity.

A CDA is a difficult beer to brew, and I've never had one that was as perfectly brewed as the Black Ace. On my drinkability scale, I give this beer a 4 out of 5, because not everybody enjoys the roastiness of a CDA. If you enjoy darker beers, try this beer.

Bevel, located at 9th Street Village, will celebrate its grand opening with four food trucks and live music. The outdoor space is amazing, shared with the DIY Cave, artists' studios and more. While I was there, an artist was painting a mural on an outside wall. Bevel plans on having a rotating mural, updated every year. Inside, disc golf-inspired fixtures and logos demonstrate the owners' love for the game. The husband and wife team are both professional disc golfers with numerous world championships under their belts. Well done, Nate and Valarie Doss. I cannot wait to see what you brew next!