The Grateful Dead is one of the most polarizing bands in the history of American music. With its insanely deep vault of albums and songs, along with diehard fans—perfectly dubbed Deadheads—still riding for their favorite band today, Grateful Dead has a legacy that will continue to live on in music lore. So why not celebrate it?

That seems to be the plan this Saturday as the High Desert Music Hall in Redmond is set to host A Grateful Night, an event bringing together a few of Central Oregon's finest musicians to offer up their own Grateful Dead tributes. The night is also a benefit for the Redmond Food Bank (bring five cans of food for entry, or 20 for entry and a poster) that will feature a silent auction. Attendees can also bring pieces of warm clothing that will be donated to Redmond's houseless community. 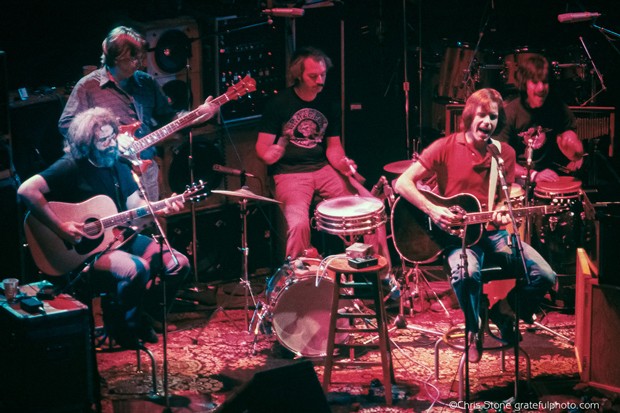 Bands playing include The Mostest, G Bots & The Journeymen, Pete Kartsounes, Call Down Thunder and a handful of other guests.

"I'm one of the lucky ones that is old enough (yet still young) that got to see Jerry Garcia and the Grateful Dead 40 times," says Kartsounes. "I traveled around the country and saw them in Las Vegas, Michigan, Ohio, Illinois, Indiana, Florida and Kentucky from 92 to 95. One thing that always struck me as fascinating is the fact that they all seem to be playing their own parts to create the Grateful Dead music."

Kartsounes also applauds the members of Grateful Dead for each playing in their own musical style, and notes how the band wasn't afraid to blend different sounds and take on multiple genres. And of course, you can't forget to mention the songwriting.

"When it came to their own writing, it's something that no other band has come close to capturing in my book. The lyrics/songwriting from Philip Barlow and Bob Weir and Robert Hunter and Jerry Garcia was unlike any other. Genius if you ask me. No one writes like that but them," he added.

To help get pumped for the show, the latest release from the archives of the Grateful Dead on streaming services is live from the Fox Theater in St. Louis, a show the band played back in 1971. It's a showcase of 28 songs for Deadheads looking to get in the mood for their pre-game Saturday night. But really, one can dive into almost any piece of work from the Grateful Dead to know you're hearing something great. The community they've built has stood the test of time.

"The last thing that was great about seeing them was the people who followed them. It was a family and community," reflected Kartsounes. "It felt safe and it was peaceful and loving and everyone always had a smile on their face, and treated everyone respectfully. You just don't get that these days like it used to be. Yes, there are still small pockets of that, but nothing like a Grateful Dead community."