While Central Oregon is home to several LGBTQ-friendly organizations, some gay, bisexual and transgender kids still struggle to find their place.

But one new organization is aimed at bringing people together to support LGBTQ youth in Bend. 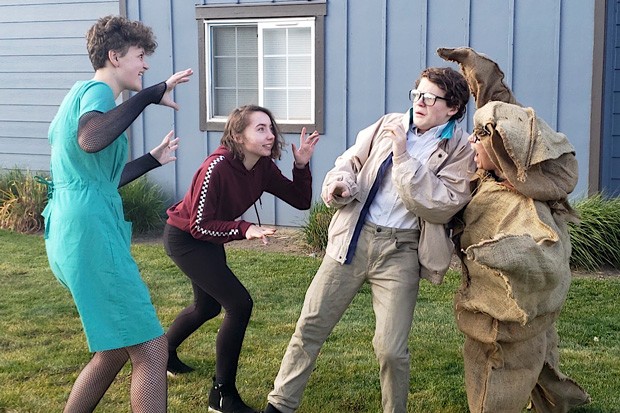 Youth Experiential Entertainment Theater is made up of local students who have banded together to entertain the community while supporting one another in the arts. Their first performance was a play titled "Blue," which they performed at this year's Pride festival. The play focuses on the suicide of a young boy—a seemingly heavy subject for 15- and 16-year-olds, but one that deeply resonated with everyone involved.

Andrew Fairman, a transgender teen and head of YEET, explained the personal importance of the play.

The subject matter of their second show is lighter. According to event organizer Raechel Gilland, it's "full cheese all the way." Gilland is the founder of Kings and Queens of the High Desert, a drag-oriented organization that welcomes queens and kings of all ages and skill levels.

“Being introduced to the drag world… watching from the back… I always thought it was so cool, but I never had the opportunity to be involved.”—Andrew Fairman tweet this

YEET's first drag show will combine cult classic musicals with Halloween-themed characters, ranging from "Rocky Horror Picture Show" to "Rent." Initially, Gilland denied their request. "I had so much on my plate," she said. "But come on... how could I have said no to these kids?" It helped that Fairman completely took the reins. "These are proactive youth that want to do theater," Gilland explained. "Andrew sends me all of the information I need, he does the production stuff... the kids come up with the songs, they choreograph the numbers. Really, I just oversee and help where I can."

"It's so much fun," Fairman said with a huge smile on his face. "Being introduced to the drag world... watching from the back... I always thought it was so cool, but I never had the opportunity to be involved." Gilland has noticed a positive impact on the parents of the teens as well. "This has been a way for parents to accept drag as more of a performance art. You don't have to be gay to do drag. This is about helping kids find a community that's safe." According to Gilland, some of the parents are still "iffy." "But," she says, "This show is giving children the opportunity to explore new venues—and giving parents the opportunity to explore new acceptance levels."

After spending an hour talking to Fairman and his friends, it became clear that—though still in its early stages—YEET had made a major positive impact on everyone involved. These teens were not only able to express themselves, but they were being encouraged and supported to explore new methods of self-expression.

The teens have been working hard to bring a family-friendly drag show to Bend. They rehearse during lunchtime at school and after class (in between their extracurriculars). They're hoping to hold their final dress rehearsal at Prestige Senior Living, bringing live entertainment and youth to those that may miss greeting door-to-door trick-or-treaters. The show itself is relatively short, at a little over an hour. "And lots and lots of candy," Gilland reminds. "Be sure to bring a pillow case!"