Samuel Eisen-Meyers has a fresh start with The Joyful Noise

Currently on tour in Europe with fellow Portland bands Moorea Masa and The Mood and Swatkins, Samuel Eisen-Meyers found himself in Italy the day we spoke on the phone—and made sure to warn me of the sketchy wi-fi of the Air B&B, in case we lost connection. We didn't lose connection, but Eisen-Meyers did tell me about the positives in his newfound connection with The Joyful Noise. 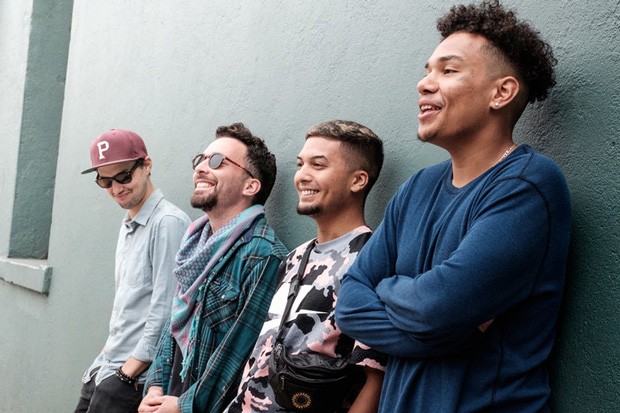 "It's really a blessing," says Eisen-Meyers of the friends-first band. "They're all great guys."

When he was around 13, Eisen-Meyers fell in love with the guitar, and music, which set him on this path for what he calls just part of the "undetermined lifestyle." You'll hear the variety of influences in the group's music, as Eisen-Meyers lists Muddy Watters, Stevie Wonder, Earth Wind and Fire and Crosby, Stills & Nash as influences—and that's to name only a few.

In college Eisen-Meyers had plenty of music in the vault, having already completed four studio projects. Once he merged with The Joyful Noise, Eisen-Meyers totally got rid of his past works as a way to lay a foundation for the future of the group's music.

"It felt really good, actually," he says of letting go of the past. "It was figuring out what works and what doesn't. Just do what feels right."

The group's debut EP, "The Heart of the Soul Pt. 1," was released this past January. Eisen-Meyers says the project really helped him regroup as a songwriter—especially in light of him getting rid of those past works. Throughout the project the group questions various themes of life, whether it be direct or indirect.

"It was almost like a self-discovery album," says Eisen-Meyers. "It's about the vulnerability of humans. To be OK with that vulnerability."

One of the tracks on the project is called "What Do I Stand For?" I asked Eisen-Meyers if he could tell me what he stood for. His response sums up the project even more.

"The song is definitely about asking that question. I'm figuring it out still," he ponders. "Again, being OK with the vulnerability of that question—a lot of times in life things are about what we are against. But I want to know what are we for?"