A Life Lived In Vinyl

A Facebook friend's challenge prompts a look back at this writer's 10 most influential albums, from Springsteen to the Chipmunks doing The Beatles

April 26, 2020
1 comment
A recent post from a friend on Facebook is one of those Top 10 lists that people are challenged to make. You know, like, what are the Top 10 activities you enjoy doing during the COVID-19 quarantine. Usually, I have little desire to participate, but this challenge really piqued my interest.

A friend posted that he was challenged to name 10 albums “that have influenced my musical taste and upbringing: one record per day over the coming days; no explanations; no reviews; just the cover art.” I’m tweaking this one a bit and am going to run with it.

Along with the cover art, I will include explanations for the Top 10 records that have “influenced my life and my taste in rock ‘n’ roll music,” in chronological order.

The Chipmunks sing The Beatles Hits (1964)

This is my earliest memory of having a relationship with a vinyl record. Just like most of the other kids I knew, I loved The Beatles—those mop-topped, madcap lads from Liverpool. One summer day—I believe it was when we were living in Norfolk, Nebraska—the older teenage babysitter next door was out on the front porch, loudly playing her Beatles album. I was about 10 years old and thought that was pretty cool, but I thought I could do her one better. Why play just a Beatles album when you could play the freaking Chipmunks singing the Beatles?!

I drug my record player out to the front porch and blasted her with the Chipmunks, figuring to impress her with my refined taste. Her horrified look of disgust said it all as she quickly retreated inside the house, never to be seen again. I guess it was just too much of a good thing for her to comprehend. I continued to play the heck out of that record anyway.

I was just beginning junior high school and was a huuuuge Monkees fan. People called them America’s answer to The Beatles, but I never compared the two. The Monkees were a packaged product slapped together to make a TV comedy show and put out classic bubblegum music. There was even a Monkees line of men's clothing. I had a cool button-down shirt with the same pattern as the one the late Davy Jones is wearing on this cover. He’s the second one from the right.

This was the Monkees’ second album, and is one that I would always take to any parties where there would be a record player, which was all of them. The Monkees were my favorite band in my formative years, just before the clutches of rock ‘n’ roll really got a hold of me.

One of the great American garage bands of all time, out of nearby Boise, Idaho. These guys pumped out a parade of Top 10 hits, and their colonial attire only added to the fun. They were the house band on the weekday, late afternoon dance show, “Where the Action Is.” I would rush home from school so that I could watch it on our little black and white television. These songs were terrific fun to sing along with (still are) and were a huge part of the Golden Age of Top 40 AM radio in the 1960s. Dance party songs including “Kicks,” “Just Like Me” and “Hungry” stand the test of time and are still fresh.

At 14, I’m young, impressionable and soaking up everything that I can see and do. One day on one of the musical television shows I see this new band having fun while laying down some funky grooves, the likes of which I’d never heard before. This was some new music that grabbed ahold of me and wouldn’t let go. So there I was, this middle-class white kid in Manhattan, Kansas, getting my freak on long before I knew what that even meant. This band’s major hits and recognition would all come after this early release, but I had already secured my passage aboard the Sly funk express.

As mom turned into the driveway, I would shut down the stereo console, grab my books and head out the door, ready to take on another day. tweet this

Cream - Goodbye (1969)   These guys were the Godfathers of the term, “Power Trio.” Of all my favorite bands up to this point in my life, Cream was the first band in which each musician was a god of his instrument. The immense talent of these three blokes just blew me away. I wore out the grooves of the previous two-record release, “Wheels of Fire,” but this swan song to their too-short career is a sentimental favorite. In the late summer of 1970, I was again a new kid in school as I began my sophomore year in high school.

My dad worked for Social Security and every promotion entailed a transfer, so by the time I entered high school, we had lived in seven different towns in three different states. In the morning my mom would drive my dad to his office downtown and drop him off before returning to take me to school. That gave me about a 15-minute window to put this baby on the turntable and crank it up as loud as I wanted. To steel myself for the day, I would play the song, “Badge,” back-to-back-to-back, loud enough to vibrate the dining room windows. And as mom turned into the driveway, I would shut down the stereo console, grab my books and head out the door, ready to take on another day. 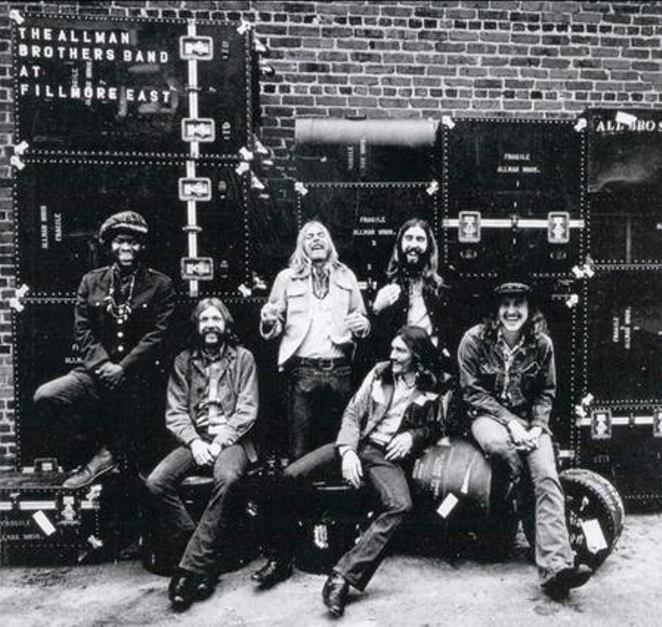 Well into high school, my taste in music continued to mature and expand from pop tunes to cerebral jamming by guitar and drum virtuosos. I had noticed this album cover in Rolling Stone magazine, but did not know the music until a high school buddy invited a few of us over to his house on a school night. We piled into his room in the attic, where he had his new stereo system hooked up and wanted us to hear what it could do. He had two new JBL 100 speakers with the cool, tactile foam egg carton covers. When he put on this album and cranked it up, the sound was incredible.

I became a big Allman Brothers fan that night. “In Memory of Elizabeth Reed” is arguably the greatest rock instrumental of all time.

With high school graduation approaching, Mick, Keith and the boys became my go-to rock ‘n’ roll band, earning the handle of “World’s Greatest Rock ‘n’ Roll Band.” I liked all their records, but this one was special: a double album that had a little bit of everything, from ballads, to gospel, to world music to downright dirty blues and sweaty rock ‘n’ roll.

It became my soundtrack for that magical summer after graduation, when the world was wide open, even in small town, southeastern Kansas, which was a long ways from everywhere. One of my jobs that summer was throwing an early morning newspaper route from my 1961 Dodge Seneca with push button transmission. The music from this epic rocker would blast out of the 8-track tape player as I loped across dewy, manicured lawns to deliver papers. (This was the first record that I owned in two different formats — vinyl and 8-track.) The Stones toured America that summer, even playing in Kansas City three hours away, but I didn’t make it. That pleasure of my first Stones concert would come three years later, in 1975. Meanwhile, this album still works itself into my summertime playlist, every year.

Eldorado — A Symphony By The Electric Light Orchestra (1974)

Two years of junior college under my belt and it was now on to the big State University. During that first year away at school I wore out the grooves of this record, a fun, romping marriage of rock ‘n’ roll and stringed instruments. Sides one and two were like movements of a real opera as the songs melded into one another. It was one of the first “concept” albums out there. It’s one of my favorite singalong albums, and I sometimes fantasize about conducting a young orchestra and choir to perform the “Symphony” in its entirety, in front of proud parents and families. And I would sing along, of course.

I was about two years late to jump onto the Springsteen bandwagon. When he made the covers of Time and Newsweek the same week in 1975, I was turned off by all the hoopla and just assumed that he had to be overrated. A couple years later I borrowed a copy of this album from a college buddy. The Phil Specter-esque bombast of the title track won me over immediately. The rest of the album spoke to all my hopes and dreams.

It starts off like a bat out of hell and ends with the late Clarence Clemmons’ hauntingly beautiful sax solo in “Jungleland” that still gives me goosebumps. In 1978 I witnessed Bruce and the E Street Band at the tiny Memorial Hall in Kansas City, Kansas, and it would alter my rock ‘n’ roll future. This show became the yardstick by which every other concert was measured, but no one could match the energy and passion.

It all started when I heard a Saturday morning “Weekend Edition” NPR interview with bandmates Patterson Hood and Mike Cooley talking about this rock opera they wrote, loosely based on the sad and tragic story of the rock band Lynyrd Skynyrd, which lost three integral members in a 1977 plane crash. Me being a big Skynyrd fan, this conversation immediately caught my ear. By pure chance, a short time later, a high school friend living in Nashville (the same guy who turned me on to the Allman Brothers Band! — see Album #6) sent me a CD copy of SRO, and I’ve been a huge DBT fan ever since.

This double album had the ignominious coincidence of being released on 9/11/2001, so was rightfully overshadowed. Moments of joy and reckoning blossom throughout this opera, as the band offers its genuine, home-grown take on the “duality of the southern thing.”

Songs like the gut punch “Three Great Alabama Icons,” the revved-up “Zip City,” the autobiographical “Let There Be Rock,” and the haunting finale, “Angels and Fuselage,” make this an all-time classic rock ‘n’ roll record. These young(er) guys get it!


-Richard Sitts is a former newspaper editor and, now semi-retired, the copy editor for the Source Weekly.