The Jess Ryan Band gears up for a debut album

If you're a fan of the local live music scene in Bend, you've probably seen Jess Ryan drawing an audience at various venues — either solo at open mics, or with her ensemble The Jess Ryan Band. Primarily influenced by alt rock bands of the '90s, her band's sound features blues-drenched lead guitar, groovy bass lines and Ryan's smoky vocals. We sat down with Ryan to talk about the band's forthcoming album. 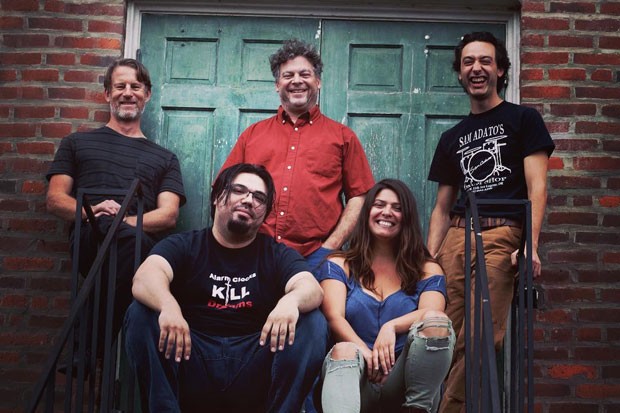 Source Weekly: Tell me about the fundraising effort for your upcoming album.

Jess Ryan: We're halfway to our goal. My dad sent over 500 bucks towards it, but he's like, 'I don't do this online thing.' So, he just mailed me a check, so you can't actually see on Go Fund Me that we've reached our halfway point. And we have a little money saved already from shows, but we are exactly at that halfway point.

SW: Is there a hard end date to the campaign?

JR: No. That's kind of why I chose Go Fund Me over Kickstarter, because I knew that these things take time and I wanted it to be up there so we could have an opportunity to share it with different people and continue to hopefully make more fans who would want to contribute.

JR: Our goal is $3,000, and that's kind of what we figured based on pricing out different studios and considering mastering and manufacturing.

SW: How long has this record been in the making?

JR: I feel like it has been a long time in the making for me just writing songs and refining them and stuff. And then, just moving to Bend five years ago, and then in the last two years/three years just forming the band — getting these guys together. Yeah, finally we're just like this unit. It's like, OK, we have the songs, we have the energy together, it's time to put it on a record, you know?

SW: What are some of your musical influences?

JR: I think when I've really thought about it... because my first response is always like — oh, Ani DiFranco, because I was like 16 and I just found her and fell in love — or 15, that's right, that angsty age. But for me and a lot of the guys in the band, too, excluding maybe James the guitarist, we listen to a lot of that '90s alternative rock, I think that's the big influence. You know, Alice in Chains and Queens of the Stone Age and Tool, because there's definitely a little bit of an edge to me and the guys help bring that out.

SW: What were you trying to accomplish forming a full band versus going solo?

JR: You know, I didn't even actually seek out the band. It just kind of happened. I was playing at open mics around town and it started initially with James Hutchens who plays lead guitar. He came up to me and said, 'You sound really good—is it OK if I join you on stage and play with you?' and I was at open mic and I said, 'Sure, that's great.' And so, he and I started playing together — and then, for the first time in my life, I actually started writing songs with James. I had never written songs with anybody. So, then it was this collaborative piece that was really incredible — it opened new realms of possibility. Because he's such and incredible musician and my guitar skills are like OK, but I can hear so much more in my head and feel so much more in my soul then I am able to technically play on guitar. So, James will have an idea and then I'll have these ideas to build on it or sometimes I'll sing — I can't even name the notes — I don't have the language necessarily, but I'll be like, OK, let's do this and I'll try to sing it and he'll find it really easily. So, we're writing songs together. It's incredible.

So, I started doing that with him and it was sort of just the two of us for a while. I started calling us Jesse James and the audience were the 'bandits'— so we were Jesse James & The Bandits. We didn't have any other members so there were no bandits, really. I wanted there to be, just for that namesake (laughs). Eventually this guy Jeff who plays around town, he was like, 'I want to play drums with you guys, and with me is Josh, who plays bass and we're kind of like together, so if you get me, you get him,' — and I was like, OK!

Eventually it didn't work out with Jeff on drums and we had another drummer, but Josh the bassist stuck around. And later we met through the music scene and through other friends and Josh and knowing lots of people in the music community — Patrick jumped on board and now he plays drums with us. And it was kind of like this beautiful, like everything kind of happened in perfect time, you know. It started with James and I getting solid and growing comfortable with each other and connecting and exploring new options as collaborators. And then everyone else came on board and contributed with their music and then Andrew on sax came in just a year ago and it was like, wow, OK, here we are.

I wasn't seeking anything out, but it happened and all of a sudden, I was like, oh my god, this is a band!

JR: I'm just hoping people can relate to it in some way or connect with it and you know, enjoy it. And for me, I mean, I haven't told this story too often — but it's a true story. So, for me, when I was in the third grade, I remember walking to school with my older brother and telling him one day, I'm going to put out an album. So, this, for me, has been a lifelong dream. So, it's so important to me. I want to capture this thing that we've created together, and I want to share it with people — and I'm meant to do this.