A Little Baja in Bend | The Source Weekly - Bend, Oregon

A Little Baja in Bend

A new food cart in Central Oregon is offering up a little bit of Baja in Bend—filling the niche for fish and chips in the local food cart scene.

James Gage, the "J" in A&J's Fish & Chips, spent three years working for a fish and chips restaurant in Oceanside, California, before opening his own food truck in Bend with business partner Alan Teshima. While they don't have a permanent home yet, the food truck made its debut at the Bite of Bend this month and has been making appearances at food cart lots and breweries in the area. They set up shop at Spoken Moto last weekend and Gage has been reaching out to local breweries to collaborate—using a featured brew for their beer-battered fish. In addition to fish and chips, the truck also serves up shrimp cocktails and ceviche—a good option for those looking for a low-carb meal. As for his Baja-inspired fish tacos—Gage guarantees they are the best tacos around. 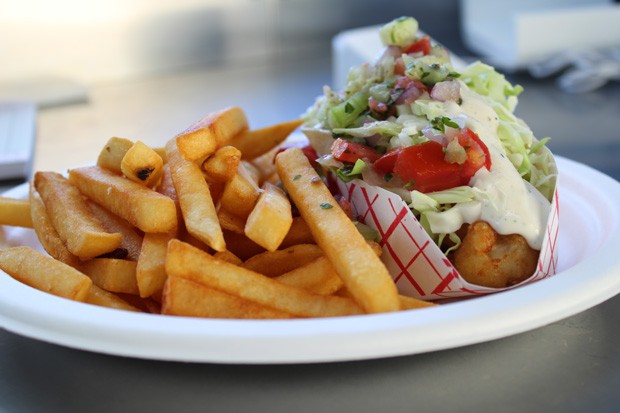 Until they find a permanent home, you can catch A&J's Fish & Chips at Music on the Green in Redmond on June 26, Monkless Belgian Ales on Saturday, June 29 and Ale Apothecary on Sunday, June 30. To keep tabs on where they'll be next, follow them on Instagram: @a_j_fishandchips