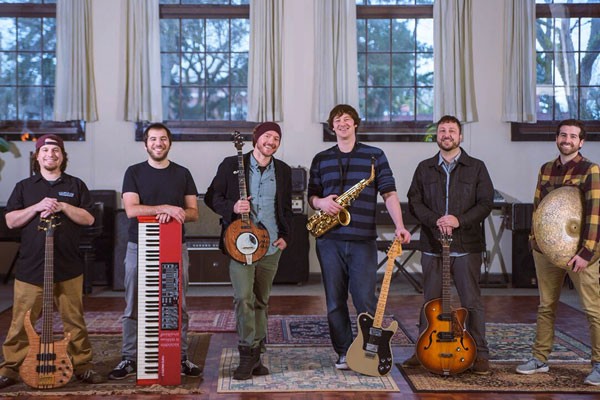 While the World's Finest performance on 4/20 may be a celebration of the cannabis community in Central Oregon, you don't have to be someone who partakes in the enjoyment of the plant in order to enjoy the varied, yet refined sound of the band.

"We've been coming to Bend forever, it feels like. We've done two New Year's shows there and it's always been a party. Bend gets down with our particular brand of fun," Chris Couch, the band's guitarist and vocalist, says.

This time around, World's Finest, a band focused strongly on string-centric Americana, but also dabbling in reggae, funk and bluegrass, returns to Central Oregon from their home base of Portland, with a new album in tow. "Chromatophores" uses more experimental instrumental landscapes and longer compositions to represent what the band does in concert.

"We wanted an album that was a representation of what we were doing live," Couch says. "We put a lot of time in over the years and we've been working on those parts and getting them right. When we knew we were going to have them on the album, we dug in and I think we polished it off pretty good. I like the idea of all of our albums being different. It's pretty interesting to see what comes up next."

When it comes to lyrical content, Couch pens many of the band's songs, while banjo player Dan Hurley also contributes. "Chromatophores" only features nine songs, which are a tighter concentration of songs by Hurley. With two writers, band members believe it makes for a good mix on each album.

"I think lyrically, it's mostly experienced-based for everybody, processing our thoughts as we go through these different life changes," Couch says.

Couch writes songs with the band in mind, leaving a little space to let other band members contribute.

"I like to bring a song that needs something else to finish it," Couch says. "They always step up and have the right part."

At the beginning of 2018, World's Finest acquired a new drummer and officially added a keyboard player. The band continues to expand its sound. Up next, the band plans to continue along their same path of performing at festivals, touring and creating more musical content.