Sagewood Sanctuary is a low-barrier shelter

March 12, 2018
comment
Ask an advocate for the homeless population in Bend—or a person experiencing homelessness—about one of the top needs for our community, and you're likely to hear "warming shelter" at the top of the list.

Advocates have long lamented the fact that there's no low-barrier warming shelter for people when the weather dips below freezing. At least, there wasn't until recently. 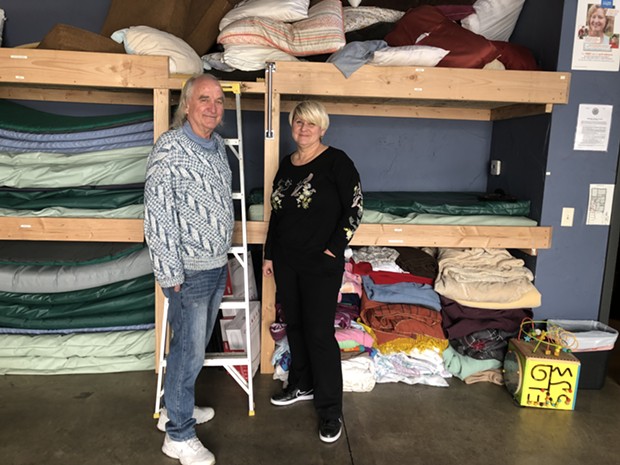 Three weeks ago, the Sagewood Sanctuary Warming Shelter opened inside Pfeifer & Associates, a facility offering drug and alcohol treatment support, housing services and other support for some of the area's most vulnerable.

Sally Pfeifer, owner of the building, says she saw a need in the community and decided to act. She hadn't thought about opening a shelter on her own, she said, "but it was 4 degrees, so I said, let's just do it here," Pfeifer told the Source Friday.

Unlike other homeless shelters in the community, Sagewood is "low-barrier," meaning people are not required to be sober or to participate in faith services in order to use the facility. The facility does not allow drug or alcohol use on site.

Pfeifer says the facility has been inspected by the fire department and is able to house up to 20 people. Over the past three weeks, the facility has been open for two weeks, opening anytime the weather is expected to dip below freezing. Attendees sleep on mats on the floor or in a newly-constructed bunk bed, and volunteers bring soup, bread and other basics for those who haven't eaten elsewhere.

Larry Kogovsek is president of the board of directors for the Sagewood Sanctuary, sleeping overnight, along with another volunteer when the shelter is open. Speaking about the "low-bar" status for admittance, Kogovsek says, "it's about relationships, and trust." Kogovsek regularly works to support the homeless population throughout Central Oregon. Both he and Pfeifer see this as part of an overall solution to address homelessness, and both continue to work to secure land to build a permanent homeless village in the area.

The Sagewood Sanctuary opens at 8pm on freezing nights, closing again at 7am the following morning.