A Man with a Plan by a Camp | Local News | Bend | The Source Weekly - Bend, Oregon

A Man with a Plan by a Camp

Samir Dean is the sales manager at Paulson's Floor Covering on Franklin Avenue in Bend, adjacent to a growing campsite on Second Street. What started as a handful of tents quickly grew to over 50 people living on the street. Dean watched the camp grow and change over time.

What he's witnessed propelled him to advocate for solutions for those living on the street. He's been contacting local officials, activists and regular community members to brainstorm solutions, while maintaining communication with his neighbors camping behind the business.

Last week the City conducted a public safety assessment on Second Street to determine if the camp will be cleared out of the City's right of way. I chatted with him about his recent experiences. 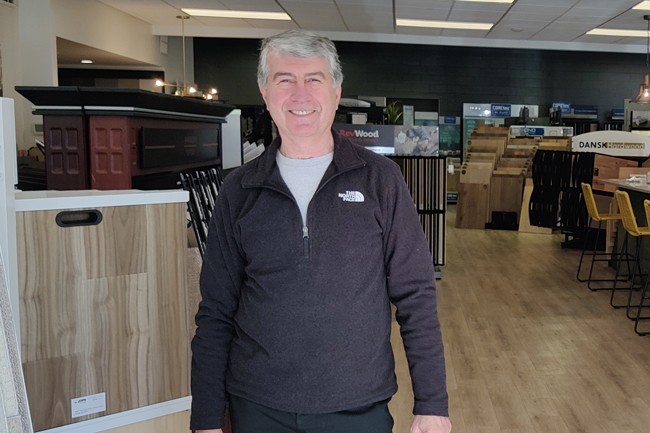 Source Weekly: When did people start living behind Paulson's?

Samir Dean: They started with just a couple of tents, they started I would say in the summer but it exploded and got worse when they moved from the Bend Parkway after the sweeps, and they started getting bigger and bigger. In the end of December I counted them, 42 tents with 50 people. But now we're getting more people, much more.

SW: Did you see any more people come after the most recent sweep at the Parkway in early February?

"Well they started with just a couple of tents, they started I would say in the summer but it exploded and got worse when they moved from the Bend Parkway after the sweeps, and they started getting and getting bigger and bigger. In the end of December I counted them were 42 tents with 50 people. But now we're getting more people, much more."—Samir Dean tweet this

SW: How has the character of the campsite changed?

SD: More are coming every week, but if you go now just to pass by you will see the trash. And I was told by other people, some people, they like to have a clean space, they have bags. But other people just litter on purpose.

SW: What are your interactions like with people living there?

SD: I've had so many very good interactions. On Saturday I was here by myself. There was a lady standing by the door and I called to her and asked if she'd like a bottle of water. She said no, so I said let's have a cup of coffee. And she came in, her name is Shelley, and we start talking then a customer came and she stopped. I told her I want to see you again. She has a lot of friends, she's lived here for 20 years. I want to invite all her friends, because I can talk to them and maybe ger her into a nice place. It's very cold here. If they can get somewhere with showering and everything, they will not say no. Some people won't move, but it's good to try.

SW: You've been meeting with a bunch of people brainstorming solutions. What are some that you're seeing progress on?

SD: I see lots of progress. I can tell you people on the left side and the extreme right, they are fed up. They will work together, but I think you're putting the pieces together, in such a situation you have to use your passion, your talent, your creativity drive and do something. I think it'll start to work.

SW: One I've heard about is setting up National Guard tents, which are heated and probably preferable to sleeping in tents. Of course the City is trying to get a managed camp going, but what's the idea here?

SD: Actually, the idea came to me because the National Guard is respected by the people because they did a good job during the vaccination drive. And it's appealing—people like it and I'll give credit to Chris Piper who is contacting the people to make it happen. It's a national crisis. If it's not going to happen here, I'm going to try and talk to the governor about it.

SW: Since this camp grew after ODOT sweeps on the US-97 on-ramp, are you worried if the same thing happens here the problem will just be shuffled away?

SD: Yes, this is my concern. That's why we have to get the tents quickly.