A Marked Increase in Need | Give Guide | Bend | The Source Weekly - Bend, Oregon

A Marked Increase in Need

With more need for services and an increase in the level of violence, Saving Grace has been hard at work during the pandemic

It's been an intense couple of years at Saving Grace. Domestic violence cases went up nationwide during the pandemic, and those numbers bear out in Central Oregon, too. The year 2020 brought a record number of domestic violence cases in Deschutes County, said Saving Grace Executive Director Cassi MacQueen. And based on law enforcement data, it's looking like 2021 will surpass those already record-breaking numbers, MacQueen said. That's also translated into a marked increase in the number of people accessing the nonprofit's emergency shelter.

Saving Grace, Central Oregon's only intimate partner violence nonprofit, operates a 24-hour helpline for those experiencing intimate partner violence, sexual assault or sexual violence. It also maintains an emergency shelter where survivors typically stay between 30 and 60 days. It also offers other support services like respite child care, court advocacy and crisis counseling. It also operates Mary's Place, a supervised facility for parents to visit kids during parenting time or to exchange children with other caregivers. 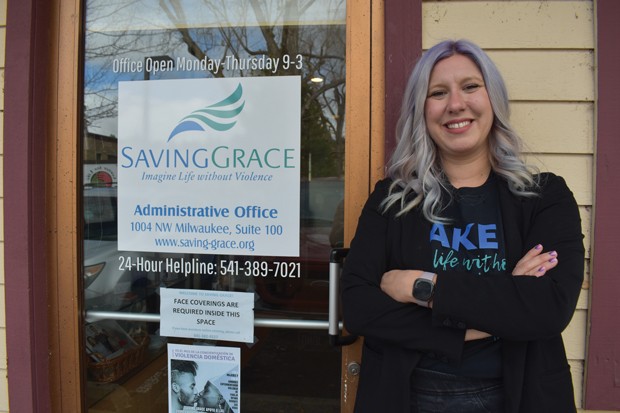 From July to September of this year, Saving Grace saw a 20% increase in the need for its emergency shelter services, MacQueen said. Not only that, but survivors have reported marked increases in the intensity and level of violence, she said.

"That's the most alarming increase that we've seen since the pandemic started," MacQueen said. "What we do know about the pandemic is that it created financial and personal stress on families like we've never really seen before, and it also changed people's support structures.

"When folks are coming to us, these survivors, and are in really dangerous situations—have had a really high and typically high lethality type of intimate partner violence situation that they've been facing—it's taking a lot more resources from us. As you can imagine, it takes an advocate a lot more to plan and keep somebody safe who is really in a dangerous situation."

Shelter beds can be limited, too.

“If you can’t afford housing here in Central Oregon, under the best of circumstances, you most certainly can’t when you’re in the worst and trying to flee a situation.”—Cassi MacQueen tweet this

"The housing crisis here in Central Oregon has 100% survivors and their ability to find safety. Oftentimes that first feat of safety for them is getting away from an abusive partner, getting into a safe location of their own, and of course if you can't afford housing here in Central Oregon, under the best of circumstances, you most certainly can't when you're in the worst and trying to flee a situation," MacQueen said.

To aid with that, Saving Grace in the past several years has added a survivor housing program to its roster, accessing funds through the Oregon Department of Justice's Crime Victims Support Services to offer long-term housing to survivors—one of the many ways it's aiming to adapt and serve clients' needs in Central Oregon.